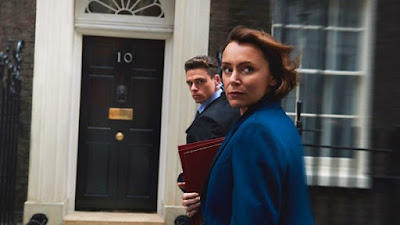 Episode one of BBC One’s Bodyguard received a consolidated figure of 10.4 million viewers, with a 40.9% share.

This is the highest launch figure for any new drama across all UK channels since 2006.

Bodyguard is written and created by Jed Mercurio, and made by World Productions for BBC One. The seven-day consolidated figure for episode one saw an increase of 3.6m on its overnight audience (6.8m), an impressive uplift of 54%. It’s the highest launch figure for a new drama on BBC One since at least 2002, when current records began.

Bodyguard is the number one drama of 2018 so far. The series opener has proved a hit with 16-34 year olds, with 1.2million watching the first episode making it the biggest non-soap drama of the year for the demographic.

Bodyguard’s showrunner Jed Mercurio, says: “The success of Bodyguard is a tribute to the magnetism of our two leads, Richard Madden and Keeley Hawes. I'm exceedingly grateful to World Productions and to the BBC who have supported the project throughout production, and to the viewers who’ve responded with such enthusiasm.”

Charlotte Moore, Director of BBC Content, says: “I’m thrilled with the response to BBC One’s new Sunday night drama Bodyguard, the figures are extraordinary and all credit to the mastermind creator and writer Jed Mercurio who is surprising the audience at every turn.”

Bodyguard continues on BBC One this Sunday at 9pm. The first three episodes are all available on BBC iPlayer. The six-part series was commissioned by Charlotte Moore for BBC One and is executive produced by Jed Mercurio, Simon Heath for World Productions, and Elizabeth Kilgarriff for BBC One.
Posted by JD at 08:32