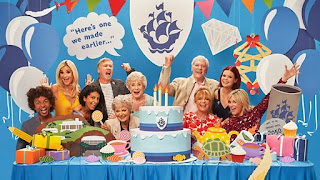 From milk bottle tops and sticky back plastic to feats of derring-do and famous Tracy Island ‘makes’, 37 presenters, 25 pets and one million badges, the longest running children’s TV show in the world - Blue Peter - celebrates 60 years on the BBC with a Big Birthday extravaganza on Tuesday 16 October 2018.
In a one-hour live special, CBBC’s flagship programme is set to remind the nation how it has come to transcend six decades and countless generations and why it still manages to inspire kids to send in more than 100,000 letters and pictures each year with nearly 200,000 under 16s owning at least one Blue Peter badge.

The special diamond anniversary programme will encapsulate all that has made the show unique over the past 60 years.

Past presenters will be joining the celebrations including Valerie Singleton, Peter Purves, Anthea Turner, Konnie Huq and Tim Vincent, some of who have been saving their washing up liquid bottles and toilet rolls for a live studio ‘make’ with a difference; Ed Sheeran will be honoured with the highest Blue Peter accolade, a Gold Blue Peter badge; there will be music from Jonas Blue feat. HRVY, The Vamps, and Sophie Ellis-Bextor all accompanied by the BBC Philharmonic Orchestra; the Diamond Time Capsule will be sealed in The National Archives which, as a non-governmental record, is a very rare event; and there will be an announcement about the return of the show’s hugely successful Bring and Buy Sales campaign in support of BBC Children in Need this November.

There will, of course, be presenter challenges of epic proportions with current presenters Lindsey Russell taking on a solo hot air balloon flight across a frozen lake in the Arctic Circle and Radzi Chinyanganya boarding Royal Navy Aircraft Carrier, HMS Queen Elizabeth, where he gets to grips with life at sea taking part in ‘man overboard’ drills, steering the ship from the bridge and sleeping in a bunker. Finally, Radzi will be winched high above the aircraft carrier in a helicopter for one last big birthday surprise that will see the famous Blue Peter Ship riding the ocean waves in all its glory.

Blue Peter Editor, Ewan Vinnicombe says: “Blue Peter is a very special club to be part of and the Big Birthday show will be a moment to remember and one to watch for all generations of Blue Peter fans. We are celebrating in style so if you’ve got a Blue Peter badge wear it with pride on our big day.”

Blue Peter launched its milestone 60th birthday in October last year with its Gold Badge Walk at MediaCity, Salford, and over the past 12 months has marked the anniversary with some incredible moments including: a special Blue Peter Strictly Come Dancing for BBC Children in Need; a visit to the Blue Peter studios by the Duke and Duchess of Cambridge who were awarded their own Gold Badges; welcoming guest editors for the first time including the likes of author Jacqueline Wilson; celebrating its 5000th episode with the launch of its Diamond Badge designed by international fashion designer, Henry Holland; flying with the Red Arrows for the RAF’s 100th Anniversary; giving people the chance to see the Millennium Time Capsule - dug up 33 years too early - on a UK tour; giving fans a chance to step into an interactive virtual version of the Blue Peter garden in 360 video, where they can explore the environment and try to find classic clips from the last 60 years; and a competition for viewers to design the new 2018 Diamond Time Capsule.

Blue Peter’s Big Birthday will broadcast on CBBC on Tuesday 16 October, 5-6pm and will be repeated on BBC Two (TX tbc). Blue Peter then continues in its regular slot on Thursdays at 5.30pm on CBBC.