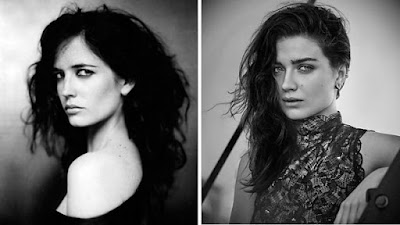 BBC Two has announced that leading actresses Eve Hewson (Robin Hood, The Knick, Bridge of Spies) and Eva Green (Casino Royale, Penny Dreadful, Sin City, A dame to Kill For) will join the cast of six-part drama series, The Luminaries.

Eve, will play Anna Wetherell together with Eva, who will play Lydia Wells. New Zealand actor Marton Csokas (The Equalizer, Lord of the Rings, Into the Badlands) also joins as Francis Carver.

The series is an adaptation of the Man-Booker Prize winning novel of the same name and will be coming soon to BBC Two in the UK and TVNZ1 in New Zealand. Produced by Working Title Television, it is being adapted for the screen by novelist Eleanor Catton and director Claire McCarthy (Ophelia, The Waiting City).

Eva Green says: “I’m thrilled to be joining Working Title and this wonderful team. Eleanor has written a series of brilliant screenplays. I loved her original novel and it’s so exciting that her own screen adaptation reveals yet more exquisite material.”

The Luminaries tells an epic story of love, murder and revenge, as men and women travelled across the world to make their fortunes. It is a 19th century tale of adventure and mystery, set on the Wild West Coast of New Zealand’s South Island in the boom years of the 1860s gold rush. The story follows defiant young adventurer Anna Wetherell, who has sailed from Britain to New Zealand to begin a new life. There she meets the radiant Emery Staines, an encounter that triggers a strange kind of magic that neither can explain. As they fall in love, driven together and apart by fateful coincidence, these star-crossed lovers begin to wonder: do we make our fortunes, or do our fortunes make us?

Eleanor Catton, screenplay writer and novelist, says: “I've had tremendous fun adapting this novel for the screen and feel incredibly lucky to be working with such fantastic people across different art forms. Writing a novel is a solitary business, but writing for the screen is emphatically collaborative, and to see the world of The Luminaries enlarged and enriched in ways that go far beyond the scope of my own imagination has been a humbling and hugely exhilarating experience. I couldn't be happier that the brilliant Claire McCarthy is at the helm, and I can't wait to see this incredible cast bring the story to life."

Claire McCarthy, director, says: “Ever since I read Eleanor’s incredible novel I’ve been completely captivated by the rich world she has created. What an honor to bring this beautiful and original work to the screen. I’m delighted to be joining forces with such wonderful actors and dynamic creative team.”

Patrick Holland, Controller of BBC Two, says: “The Luminaries is an astonishing novel exploring love and greed on the New Zealand frontier, and we are delighted that Eleanor and the team at Working Title has brought this brilliant adaptation to BBC Two. With Clare McCarthy directing and a formidable cast led by Eve Hewson, Eva Green and Marton Csokas, this promises to be truly stunning and hugely ambitious series.”

Mona Qureshi, executive producer at the BBC, says: “We’re so excited to have Eva, Eve and Marton join the cast of this extraordinary debut of Eleanor Catton’s. With Claire McCarthy directing it promises a wonderfully rich and unique piece of television, full of spirit and heart.”

Andrew Woodhead, executive producer and MD at Working Title Television UK, says: “It is such a privilege to work with Ellie, Claire and our New Zealand partners at Southern Light on this unique and magical story. To now have such an amazing cast led by Eva, Eve and Marton joining us on our Luminaries journey is also truly exciting and a testament to the beauty and brilliance of Ellie’s writing.”

The Luminaries (6x60’) will be produced by Working Title Television - a joint venture between NBCUniversal International Studios, Tim Bevan and Eric Fellner and Southern Light Films for BBC Two, in association with TVNZ, Fremantle and Silver Reel. The series will be executive produced by Mona Qureshi for the BBC; Eleanor Catton, Andrew Woodhead, Tim Bevan and Eric Fellner for Working Title Television; Christian Vesper for Fremantle, Claudia Bluemhuber for Silver Reel and Tim White for Southern Light Films with Producer Lisa Chatfield. The series will be sold internationally by Fremantle. The Luminaries has been supported by the New Zealand Film Commission.

On publishing, The Luminaries was met with worldwide critical acclaim. Most notably it won the 2013 Man Booker Prize, with Eleanor Catton being its youngest ever recipient. Filming for the adaptation is taking place from November in New Zealand and further casting will be announced in due course.
Posted by JD at 14:40