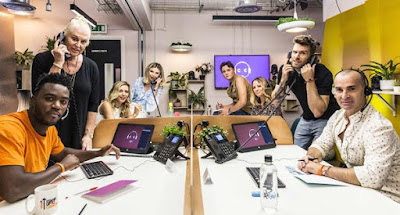 Channel 4 is set to open the phone lines at a call centre like no other - staffed entirely by celebrities, it’s a helpline for the nation, where a team of all-star agony aunts will come together in aid of Stand Up to Cancer to advise the great British public on dilemmas, large and small.

Girls Aloud star Kimberley Walsh, Made in Chelsea’s Georgia “Toff” Toffolo, comedians Mo Gilligan, and Joel Dommett, TV’s Queen of Clean Kim Woodburn, Pineapple Dance Studios’ Louie Spence, Countdown maths whizz Rachel Riley and Cuckoo actor Tyger Drew-Honey will be manning the lines at the Celebrity Call Centre, never knowing who’ll be at the other end of the phone or what problem they’ll be faced with.

They’ll be advising on everything from how to get through a break up, to extra-marital affairs, and the perils of online dating. In the process they’ll be opening up about their own life experiences and the challenges and heartache they’ve faced.

Celebrity Call Centre was commissioned by Channel 4 Formats Commissioning Editor Lee McMurray and Head of Formats Dom Bird. The one-off Stand Up to Cancer special will be made by Kerfuffle TV, with Steven D Wright as Executive Producer.

Lee McMurray said: “As well as serving up a fascinating, funny and often moving snap shot of the modern-day dilemmas that trouble the nation, the beauty of the format is that it also encourages the celebrity agony aunts to open up, talking to members of the public in a way they never have before, and providing Channel 4 viewers with surprising revelations and touching insights into their real lives and personalities.”

Steven D Wright added: “We’re delighted to be producing Celebrity Call Centre as part of Channel 4’s Stand Up to Cancer season this year. As well as contributing to a worthy cause, the format entertainingly gets under the skin of what’s vexing Britain, and cleverly brings some of our favourite stars down from their pedestals. Expect shocks, surprises and revelations as the celebrities open up to tackle the Great British public’s problems and predicaments.”
Posted by JD at 09:55