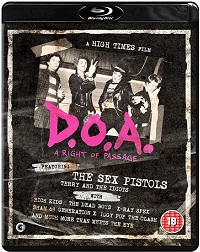 D.O.A. - A Right of Passage is out on Dual Format on 10th September 2018.
And to celebrate we have a great competition for you and 2 copies to give away.

Synopsis
In 1978 The Sex Pistols embarked on the legendary American tour that they would never finish.

DOA: A Rite of Passage is the unique, grainy and up-close document of a unique moment in music history, packed with live footage of The Pistols’ incendiary American shows, as well as live performances from Terry and The Idiots, Dead Boys, Generation X, Rich Kids, X-Ray Spex, Sham 69 and additional music from The Clash and Iggy Pop.


Terms and conditions
1. Closing date 17-09-18
2. No alternative prize is available
3. When the competition ends as indicated on this page, any and all entries received after this point will not count and emails blacklisted due to not checking this page first.
4. Winners will be chosen randomly and will be informed via email.
Posted by JD at 15:12

Email ThisBlogThis!Share to TwitterShare to FacebookShare to Pinterest
Labels: D.O.A. - A Right of Passage