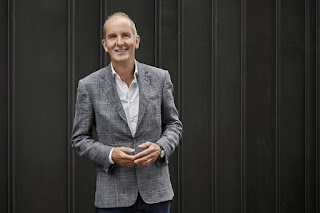 How do you think the houses we are building have evolved since Grand Designs first aired?
We started making Grand Designs 21 years ago. We were still at the end of the 20th Century and we were still in a little bit of an insecure relationship with that century in many ways. It was the century of modernism, of international architecture, of functionalism, of brutalism, of trying to design for modern use. And actually, back then we were still building houses with dining rooms in them. It seemed at odds with the way that we had been living for 30 or 40 years, I think we’ve moved on.

If you went back and watched the first episode of Grand Designs, would you notice significant differences from today’s format?
I refuse to watch myself on television, so I wouldn’t know! I think it has changed. We talk about this quite a lot, about the identity of the programme which is determined by a number of people who all collaborate. One of the things you can detect now is that TV was much slower back then, editing speeds have since increased.

Has what you’re looking for changed? Is sustainability more important, for example?
It was a more unusual thing back then. Sustainability and the ecological performance of buildings was a fringe interest back then. We’d have our token eco-home in each series. Now, all of them are super-insulated, all of them are way beyond building regulations, because if you’re going to build a house for yourself why would you not want a zero-energy build. All of them have some form of managed ventilation or innovative heating source or solar panels. It’s become less of a fringe benefit and more of a core value to what we film. In terms of what I’m looking for, I’m hoping they’re not going to be grotesque consumers of resource, but actually quite efficient. I’m always looking for great stories and projects that deliver something unusual, that we haven’t seen before. If a project comes in and it’s so similar in story and design to something we’ve done, then we probably won’t do it. And I think that’s helped with the longevity of the series.

Is the build selection process extremely stringent?
We do a lot of due diligence and research and we always tell a story which is the truth. Of course, there are many projects that don’t come our way, we have people say - I really wanted to do it but my architect said, “No way!” or vice versa. I visit lots of wonderful buildings where I think; “I’d have loved to have filmed this!”

What is the most common mistake self-builders make?
Of the people we’ve filmed, I think the most common mistake is one which is so bound up with human nature and over-confidence. Those of us who are blessed with a degree of normal self-doubt are hugely nervous of the idea of embarking on a project like this. And so those that do, tend to be pretty well-empowered individuals. The majority of people we film have a degree of self-belief, that’s what’s got them there in the first place. That brings with it a belief that I hear again and again, which is; “This project is going to come in on time and on budget.” And my answer is; “I’ve never really seen a project do that.”

Would you ever do a Grand Design for your own home?
I have done, but I don’t talk about it. Firstly, because talking about your own build is a very different thing from guiding the viewer through someone else’s project. Secondly, I value a degree of privacy. Filming can be stressful and personal, so hats off to all the people who let us into their homes and into their lives. I think they do it because they recognise the significance of the process and they want to have it recorded for them, for their family and for posterity.

This series seems to contain some genuinely remarkable builds. One of them will resonate with people of a certain age because there’s a Ferris Bueller link…
So many people know that movie. This project is in Padstow and draws its inspiration from the house featured in the film, a real house in Illinois. Our couple, originally from London had never gone to Illinois to visit it, so this programme ends up as an interesting lesson on what happens when you pursue an idea on a whim.

Can you tell us more about Grand Designs’ first ever ‘healthy house’ that will be featured in this series?
It’s a really interesting case where two of the children are very allergic and have to be regularly treated at hospital. I’m interested in this personally because I’m an asthmatic, so I’m very careful about the air quality where I live and anywhere where I like to stay. But for these guys it’s a totally different ball game. For example, the majority of domestic carpets in the UK use glue that lets off gases. What these owners have built for their boys is a house using carpet with no solvent-based glue on the back. They’ve used solvent-free, low-VOC paint, they’ve used a minimum number of glues, the MDF in the building only contains trace elements of formaldehyde and no varnishes. What they’ve done is produce a house that’s beautiful – glorious – it just also happens to have been built with health in mind. It’s a house where the fresh air is filtered coming into the building due to a mechanical ventilation heat recovery system. Tests were undertaken that showed the building was performing up to 70% better than a new build in terms of VOC emissions. The mother said that the kids had only experienced one or two mild allergic reactions in the last six months since living in the house, compared to every other week (minimum) before they moved in. The family believe that the building acts as a respite for the children, helping them to live a normal life.

This series also features identical twins with identical lives?
Nik and Jon are interesting guys, they drive identical cars, work in business together, in a design practice and they also run an event space in Sheffield. They’re very design-conscious, it’s what they do for a living. And they’ve built two very similar houses next to each other. But there are some key differences. It’s an exercise in getting stuff right, having two tries instead of one. Two minds are better than one, a joint creative strategy, and trying to get the best out of a pretty low budget that they both have. I like that very much.

Lastly, chefs often say that people never like cooking for them. Do you find that people are terrified of having you over in case you don’t like the curve of their bannisters?
I’m such a pussycat. People are immensely self-conscious about their homes. A mate of mine isn’t a Dad, but he’s got about 15 god-children. I asked him what that was like, and he said it’s great, because every time he sees them, they’re on their best behaviour. That’s kind of how I feel about houses, I really like it when I go round to someone’s house and they have bothered to tidy up!
Posted by JD at 17:48