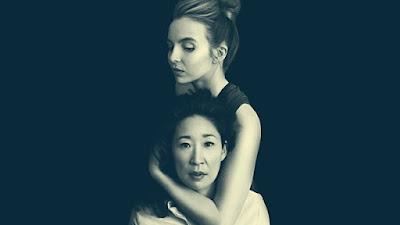 "I’d love to explain personally a little about why I love this project, why I was so drawn to the books and, most significantly, these incredible characters.

Luke Jennings, the writer of the novellas on which this series is based, has created two fascinating women in a world of espionage and conspiracy. I want to honour his story, but I also long to ground it in a genuine female narrative. We’ve seen the TV and film ‘idea’ of these women before - the cold-blooded assassin, the brow beaten cop. So much so that I was desperate to get my hands on them and make them proper, rounded heroines for the modern man and woman.

Both Eve and Villanelle are equally as flawed and disarmingly insane as the rest of us; they have simply had lives sprung on them that we have happened to avoid. Outside of their adventures, I’m interested in the sides of them that make these women human, however spectacular their lives become.

Villanelle is a psychopath, but a real one. The kind that psychoanalysts dedicate their lives to investigating. Lacking in empathy, deluded by their own egos, but often functional and normal to the naked eye. Eve is her opposite - warm, insecure, frustrated - but they are as funny and as ambitious as each other and together they will take us down a rabbit hole of a psychological thriller.

I want to subvert the genre, the expectations and every cliché that is tied up in the spy-action-thriller. And even more so, in the female characters that populate them. This is NOT an 'oooo badasswoman show' where everyone’s clothes fall off after an impossibly long fight scene. Nor is it a humourless, plot-driven show about a mystery. This is a meditation on murder, on loneliness and the potential for a world without conscience. It’s funny and frightening.

Killing Eve is a character study on two lives, two women and their circumstances, their homes, their wants, their fears and what keeps them from ending it all. It’s just that one happens to be an assassin and the other a spy. If I’ve done my job right, the audience should feel equally chilled as they are excited by the determination of these woman, their journeys and how drawn they are to one another.

I hope this show will bring a new dimension to the spy-like romp with designer scarves we have seen before. At its heart, it’s about the depths of the people as much as it will be about the thrill of the plot.

I hope you enjoy it!

Eve is a bored, whip-smart, pay-grade MI5 security officer whose desk-bound job doesn’t fulfil her fantasies of being a spy. Villanelle is a mercurial, talented killer who clings to the luxuries her violent job affords her. Killing Eve topples the typical spy-action thriller as these two fiercely intelligent women, equally obsessed with each other, go head to head in an epic game of cat and mouse.

Starring Sandra Oh as Eve, and Jodie Comer as Villanelle, the series - a combination of brutal mischief making and pathos - is filled with sharp humour, originality and high-stakes action.