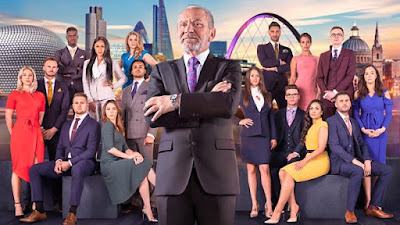 A fleet of four black cars, sixteen wheelie suitcases, early morning phone calls and a bunch of bold claims. It can only mean one thing…

The Apprentice is back! Returning to BBC One at 9pm and airing weekly on Wednesdays from 3 October 2018, and available live and on-demand on BBC iPlayer.

This year’s series sees sixteen budding entrepreneurs put through their paces by business heavyweight Lord Sugar as the search for his next business partner begins.

Baroness Brady and Claude Littner resume duties as Lord Sugar’s trusted advisors and his ‘eyes and ears’ on the tasks, reporting back on the candidates’ every decision in the boardroom.

This year, the award-winning series will be bigger and better than ever, as Lord Sugar ups the ante right from the start and warns the candidates to “expect the unexpected”. For his first challenge, Lord Sugar immediately sends the candidates abroad - with a strong word of warning ringing in their ears; “Remember, this is NOT a holiday”.

Straight from the first boardroom, the business hopefuls jet off to Malta tasked with buying nine items at the lowest possible prices. How will they cope sourcing, negotiating and buying in a global business environment?

It’s not just foreign tasks that Lord Sugar has up his sleeve. For this series he is also sending the candidates around the UK; to Glasgow to sell art, Birmingham to clinch deals at a Body Building Expo and back to London to launch a budget airline.

To highlight the number of different locations of this year’s tasks, eagle-eyed fans will also notice that the photography of Lord Sugar, Karren, Claude and the candidates features a skyline including Malta, Birmingham and Glasgow alongside London.

The candidates come from a broad range of backgrounds; from Law, Tax and Arboriculture (tree surgery) to Fashion Design, Marketing and Sport. However, they all have one thing in common, a passionate desire to secure a £250,000 investment in their business plan and win a partnership with Lord Sugar.

Over the past seven years, Lord Sugar has invested a staggering £2m into eight fledgling businesses. Last year’s shock decision, which saw him partner with both finalists, each receiving a £250,000 investment, proves that anything can happen in the boardroom.
Comedian Rhod Gilbert returns to host The Apprentice: You’re Fired, analysing each week’s events at 10pm on BBC Two, immediately after the main show. Joining Rhod each week will be a panel of business professionals and celebrity fans, sharing their opinions on the highs and lows of each task.

Two special episodes, The Final Five and Why I Fired Them, will also return to reveal the stories behind the series. The Final Five shares the journey of the five strongest candidates, just before they battle it out to secure their place in the final. As the series reaches its climax, Lord Sugar will reveal further insight into his boardroom decisions in Why I Fired Them.

The official website for The Apprentice will also host additional content for viewers to enjoy. BBC Radio 1’s Matt Edmondson returns with his inimitable preview of this year’s business hopefuls in the iPlayer exclusive Meet the Candidates. From weekly highlights, to a peek behind the curtain at audition tapes and the ever-popular Honest Subtitles, the website features a wealth of additional content for series devotees.

Brand new for this year is the launch of the official The Apprentice Instagram channel - sharing even more social media goodness and behind the scenes action, including Instagram Stories and IG:TV with new vertical video content.

The Apprentice is a Boundless production for BBC One. Paul Broadbent and Paula Fasht are Executive Producers; Cal Turner is Head of Popular Factual for Boundless; Neil Smith is MD for Boundless; Sarah Clay is Commissioning Editor for the BBC.

The Apprentice will air weekly on Wednesdays at 9pm on BBC One, from Wednesday 3 October, followed by You’re Fired at 10pm on BBC Two. Watch live and on-demand on BBC iPlayer.