The Bisexual: Interview with Maxine Peake who plays Sadie 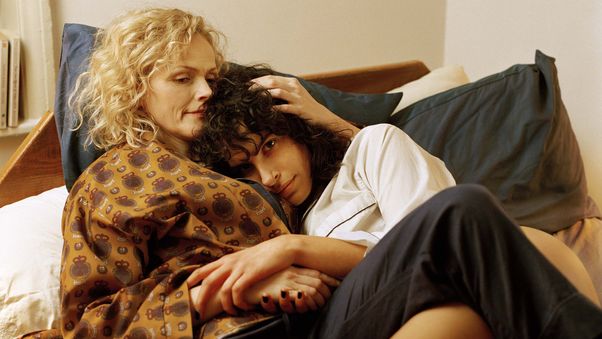 Explain a bit about The Bisexual – what’s the story?

The story is about Leila (Desiree Akhavan), who’s a young woman who’s living in East London, right in the centre of Hipsterville. She’s running a company with her long-term girlfriend. And then she starts to have feelings that she’s maybe not ready to settle down, and also that she might want to start dating men as well. It’s about her coming- of-age journey, and how the lesbian community responds to that, and how Leila and those close to her respond to that. And it’s about a group of friends who she meets along the way. Desiree says it’s seen as sort of the last taboo, a lesbian coming out as bisexual.


What was it that attracted you to the role of Sadie?

I think it was Desiree, if I’m honest. I read it, and I’d seen her film Appropriate Behaviour, and I just thought she was extraordinary. And then she’s over here, writing, directing and starring in something, and I thought “I want to be a part of this.” They approached and asked if I’d be interested, and Desiree wrote me a lovely letter saying “I really don’t know your work, but people keep saying you should be playing Sadie.” And we did a little Skype interview, and I thought she was amazing. And we just clicked, and I thought “I really want to be part of this.” It felt like nothing else I’d seen on British telly when I read it. And I felt like it was very different to stuff I’d done previously.


Sadie isn’t the most straightforward of characters – how do you see her?

There’s quite a bit of an age gap between Leila and Sadie, so I think that’s part of the complication. Sadie got a lot of things out of her system before she settled down with Leila. Leila says to Sadie: “I gave you my 20s,” but Sadie says to her “Well, I gave you my 30s,” and that’s quite interesting. As a woman, the 20s are when you're having fun, and 30s are the time when you’re thinking about family and settling down. That’s what we’re led to believe is what we should be thinking, as women.

Sadie hasn’t necessarily had the easiest life. She alludes to what it was like growing up as gay in Burnley in the 1980s. Yeah, she’s not had it easy. She’s come from a working-class background, from the north, and Burnley’s a small town in the northwest of England. It was difficult for her. At school she had to hide it. And then she’s come to London, catapulted into a very high-flying middle class world, where she’s trying to battle and fit in and keep her head above water. And I think she’s shut herself off quite a bit to survive, just got her head down and got on with it, and maybe lost a little bit of herself along the way. So it’s a bit of a catalyst for both of them, I think, when Leila says to her “Look, I’m off to explore.” I think it opens up a lot of what Sadie’s been doing for the last 20 years. You fight to get to where you want to be, but you never really arrive, you just dock for a bit. So she’s just trying to take in what she’s got, and what she’s looking for.


Do you think it’s worse for Sadie because Leila is dating a man?

Oh yeah. I think it makes her think about herself as a woman – was she not able to give her what she wanted? Was Leila ever really in love with her? Now she’s looking at the opposite sex for satisfaction and love. I think whether you’re straight or gay or whatever your sexual preference, it’s about rejection. When someone says “I don’t actually know if you’re enough for me at the moment, so I’m just going to go and find out,” that’s quite a hard thing to deal with.


The Mine! office that Sadie and Leila co-own looks like an achingly trendy media company where nothing ever quite seems to happen. Is that fair?

Yeah, and I think it’s very reminiscent of a lot of media places I’ve encountered. It’s like it was created by Chris Morris – it feels straight out of Nathan Barley. He [Morris] is such a soothsayer, isn’t he? When it came out, everyone was like “What is this?” And then it all ends up actually happening. Our company is a sort of pastiche of that East London, Hoxton, Old Street media circus. It’s a bit like a fashion Disneyland when you go down there. I think the humour comes from the fact that Desiree has really captured the essence of those places and those people.


Desiree writes, directs and stars. That’s something you can relate to, from the theatre. How did it feel watching her work?

It was amazing, because she was always a team player. It never felt like she was going “This is my show! I have many different roles to play on this show and I am the most important person here.” And it was so interesting watching her switch heads, which she did seamlessly. She kept her cool all the time. And it was interesting watching her, she’d go off every now and again and make little changes to the script. And she was really open and collaborative, and she’d let us try different things, and do bits of improvisation. There was absolutely no dictatorship going on.


Having done something similar in the theatre, would you like to write and direct and star in your own TV series at some point?

I’m not sure. I’ve written plays, but I’ve never been in a play that I’ve written, and I haven’t wanted to be. I get a lot of pleasure watching other people create the characters that I’ve written. And I have directed stuff, but I didn’t write that, so it’s all a bit different. I’ve not done the multiple roles thing. I think maybe writing and directing. But then, if I wrote a good enough part, maybe I’d want to be in it! But I do enjoy bringing other people’s words to life. But definitely I’d be interested in writing/directing. That has a lot of pull to me. But it’s so hard to juggle all those disciplines at once. Desiree’s calmness and professionalism all the way through was a real lesson.


Looking at your CV, you have the most incredibly varied body of work, encompassing Twinkle, Hamlet and almost everything in between. Do you consciously change the type of work you do in order to avoid being pigeon-holed, or is it more just a case of following what interests you?

I think it’s a little bit of both. I work on what interests me, but I think it’s a little bit of a hangover from being at drama school, being Northern, and people telling you you’d only ever play certain roles. People think if you’ve got a northern accent, that’s it. Like there’s only one character type that comes out of the North. Like we’re all one and the same person, in a way. So I think I’m always keen to show that I can do something else. I like doing different and interesting projects, and it’s about stretching yourself as an actor.
Posted by JD at 14:37