The Bisexual: Interview with writer, director and star Desiree Akhavan 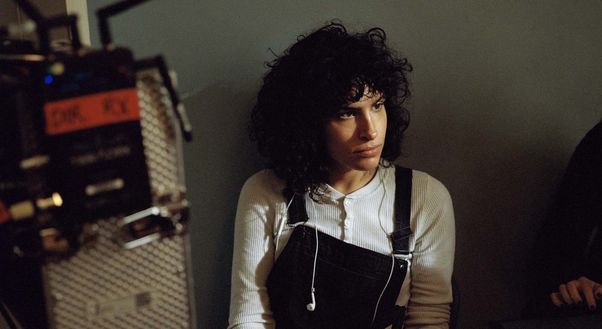 The Bisexual is your new comedy for Channel 4 – can you explain a little bit about the show?

The show is a bisexual dating comedy about a woman who has identified as a lesbian for her whole life then comes out as bisexual and starts seeing men for the first time in her 30’s.


Inevitably, there are more than a few echoes of your own experiences in there. How autobiographical is it?

It’s not autobiographical in its plot- I’ve never identified as a lesbian and came out as bisexual from the start, but the characters in it are inspired by the people Cecilia and I know and love, so it comes from a very personal place. It’s a look at London and particularly Hackney as we know it.


You describe ‘bisexuality’ as the last taboo. Do you think that’s the case?

It sure feels like it. There are worse taboos out there, but this one’s tricky because by the very nature of it being bisexual is invisible: if I’m walking down the street holding a woman’s hand I’m gay, if it’s a man’s I’m straight. That’s how a lot of people side-step the label. It has a lot of stigma to it.


At one point, Leila says the word “bisexual” makes her f*cking skin crawl. Is that how you feel?

For sure. That’s the genesis of the whole series for me- that discomfort with the truth. Saying the words, “I’m bisexual,” makes me deeply uncomfortable and I want to explore why.


Your film Appropriate Behaviour also begins with a break-up, as does The Bisexual. What is it about that situation that interests you?

When I was writing Appropriate Behaviour, I was coming out of a relationship, and managing that, and that’s where it came from. I was trying to figure out how it went wrong, still living in it. For this, it was more about what Leila would have to sacrifice and establishing everything she was leaving behind.


I’m told it was a predominantly female crew. Was that a conscious decision, and if so, what does it mean for the atmosphere on set?

I don’t think it was a conscious decision, I think I just gravitate towards the right people for the jobs and who knew how to build this world of Hackney through a queer lens. Many of the crew members were openly gay, which brought a lot of attention to detail. Set can be a very macho, male-dominated space and this was predominantly female, which was much more conducive to the kind of show we were making.


What brought you to London? Do you consider yourself a Londoner now?

I don’t know whether you can officially give yourself that title. I would love to consider myself a Londoner. I consider myself a little bit of a nomad. That was how I felt in New York as well, an outsider. That said, London feels like home and I’ve been really happy here. I think it’s a good city for outsiders.


How different do you think the series would have been if you’d made it in the US?

Oh God! I don’t think I would have had any of the freedom I had. I was given such a long leash. Between Sister Pictures and [Executive Producer] Naomi de Pear and Channel 4, it was incredible. They were constantly saying: “We want you to take it further.” They were my enablers. I just feel like I’d never have been able to take the risks that I took if I’d made this show anywhere else.


You wrote the show with your longtime collaborator Cecilia. What is it about writing as a pair that appeals to you?

We share a shorthand, a shared sense of comedy, a shared perspective on what matters and deep mutual adoration. She is my partner in all things except the romantic. I adore her and her taste. She makes me better and braver and smarter. Sometimes it’s seeing yourself through someone else’s eyes that helps you understand who you are.


You began writing aged 10. That’s not a particularly common thing for that age – why did you want to do that?

A lot of kids write stories but I wrote scripts, which I think is what’s uncommon. I specifically wrote them so that I had people to play with at lunch. I could assign roles to people and put them in my play, and I think it was just because I was very lonely and I wanted to play. I wasn’t very good at making friends.


You’ve said that TV was your third parent, and taught you about US culture. What shows do you think shaped you?

The Brady Bunch – I watched a lot of The Brady Bunch. And I watched Saved By the Bell, Full House, really saccharine, melodramatic shows about families, which was so strange, because my family didn’t look like anything I saw on television. Tracy Ullman and Mel Brooks were two of my comedy heroes. His movies and her television series – those were shows that I watched with my family, all of us together, and we all laughed. It was very rare that we could agree what channel to put on, and what programme was good, but those shows could make us all laugh, and that was exciting and special.
Posted by JD at 14:35