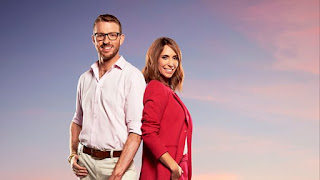 BBC One will bring audiences coverage of this year's Invictus Games taking place in Sydney, Australia.

Alex Jones and JJ Chalmers are set to present the games as the 72 people from the UK Armed Forces team compete in a series of sports in the fourth Invictus Games from Sydney.

The Invictus Games programming begins on Friday 19 October with the preview show, presented by Alex Jones and JJ Chalmers. Coverage of the Games themselves begins on BBC One every day from Sunday 21 October - Saturday 27 October 2018. There will also be a second series of observational documentary Without Limits on 17 and 24 October, following a team of injured British and Australian veterans embark on a 1000km expedition across Western Australia.

Founded by Prince Harry in 2014, the Invictus Games is an international multi-sport event that is open to all wounded, injured and sick serving personnel and veterans. Over 1,100 people registered their interest for the 72 UK team places and over 400 hopefuls were trialled for the squad.

Invictus Games 2018 presenter Alex Jones says: "It's an absolute honour to have been asked to present the Invictus Games 2018 and I can't wait to get to Sydney and learn more about all of the inspirational stories of the competitors. I'm so excited to be working alongside JJ Chalmers and to be right in the middle of the action. I think the games are going to be full of both humbling and inspirational moments not to be missed."

Presenter and Invictus Games 2014 competitor JJ Chalmers says: "Have no doubt - Invictus Sydney is going to be awesome! The Games changed my life so I live for the opportunity to help showcase them, especially as they continue to grow, educate, inspire and entertain. I cannot wait to share this amazing experience with Alex. If we are able to channel even a small bit of the energy and spirit of Invictus into people's living rooms they're in for an enjoyable and powerful watch."

Claire Popplewell, Editor, Ceremonial Events, says: "In a few short years the Invictus Games have gone from a dream to a reality to a world-class sporting event. The BBC has been a key partner in the Games from the very beginning and we are proud to be in Sydney for the biggest and best Games ever, and as always giving BBC viewers in the UK the best seat in the stadium."

The BBC's coverage of the Invictus Games is made be BBC Studios Factual Entertainment and Events. The Executive Producer is Michael Cole, BBC Studios Events. It is produced by Catherine Stirk and the Commissioning Editor for BBC Entertainment is Sarah Clay.

Across its range of social media accounts, the BBC will give fans a chance to get even closer to the BBC's coverage, presenters and special guests, with exclusive behind-the-scenes access.

Alongside the BBC One coverage, additional highlights will be shown on the Red Button and BBC iPlayer throughout the week of the Games.

The commentators for the Games this year are Eddie Butler, Matt Chilton and Rob Walker.