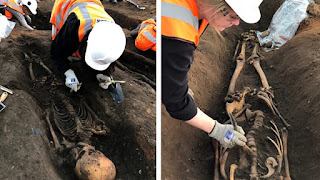 BBC Two has commissioned a major new TV series documenting the huge number of archaeological discoveries being made along the length of the HS2 route.

Made by Lion Television, Britain's Biggest Dig (w/t) has been granted exclusive access to HS2's archaeology teams, offering a unique opportunity to record and explore the biggest archaeological excavation that has ever taken place in Britain. The series will reveal the stories of people from the Stone Age right up to the 20th century - not just on the route itself, but right across the country.

Throughout the archaeological works, cameras will capture what is happening on site, from excavating huge Georgian and Victorian inner-city graveyards to finding the remains of Romano-British homes. The series will also dig deep into the archives to tell the stories of those who lived and were buried on the route - from painters and London prizefighters to medieval peasants and lords. With the use of the latest archaeological science, it will also explore the wider stories about what these sites can tell us, including where people came from and the food that they ate.

Patrick Holland, Controller, BBC Two, says: "This is a major series following this unprecedented archaeological project. The HS2 digs promise to reveal secrets throughout a vast timeline of British history and I am delighted that BBC Two will be following the journey."

Tom McDonald, Head of Commissioning, Natural History and Specialist Factual, says: "It's thrilling to be there from the very start of what is unquestionably one of the most significant archaeological endeavours in British history. It promises to make us re-interrogate what we think we know about British history and give us an extraordinary and privileged insight into the past."

Bill Locke, Director of Specialist Factual, Lion TV, says: "This 'line through time' is a unique and exciting opportunity to explore the story of Britain through a single massive archaeological project that promises many exceptional discoveries. We will be there every step of the way with the HS2 archaeologists, seeing what they turn up and following it to the labs for analysis, and tracking down key documents, enabling us to piece together the wider story of Britain through the millennia and the lives of the people, ordinary and extraordinary, who lived here before us."

London - Saint James Gardens, Euston
The excavation of more than 45,000 Georgian and Victorian burials - the largest population ever excavated in Britain - will give us a rare opportunity to understand how Londoners lived and died during the period when the city became the most populous and important in the world.

Stoke Mandeville, Buckinghamshire - St Mary's Church
An estimated 5,000 skeletons are a gateway into the medieval world and beyond, from the Black Death to farm labourers and civil wars; this is a fantastic chance to study the history of a single rural community over a thousand-year period.

Birmingham - Park Street Burial Ground
One of the biggest burial ground excavations ever to have taken place outside London, and an amazing opportunity to understand the lives of Brummies during the Industrial Revolution and beyond: who were Birmingham's new population, and where did they come from? Next door is one of the bases of the real Peaky Blinders - the Park Street Gang - as well as the site of sectarian riots against Irish immigrants and the hub of the city that became the 'workshop of the world'.

Boddington/Wormleighton – Warwickshire
Possibly 3,000 years of history in one location. We'll set out to discover what impact the Roman invasion, the coming of the Saxons, and the Norman conquest had on rural Britain - and understand why some settlements were abandoned, whilst others remained.

Britain's Biggest Dig (w/t) is a Lion TV production for BBC Two. The executive producer is Bill Locke and the series producers are Izzy Charman and Harvey Lilley. It was commissioned by Patrick Holland, Controller, BBC Two and Tom McDonald, Head of Commissioning, Natural History and Specialist Factual. The BBC Commissioning Editor is Simon Young.