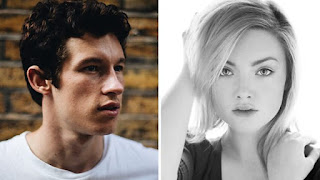 Written and directed by Ben Chanan (Cyberbully) and produced by Heyday Television and NBCUniversal International Studios, Callum Turner (War and Peace, Fantastic Beasts: The Crimes of Grindelwald) and Holliday Grainger (Strike, Cinderella) will lead the cast of The Capture, an acutely timely surveillance thriller set in London for BBC One.

When proud British soldier Shaun Emery's (Turner) conviction for a murder in Afghanistan is successfully overturned due to flawed video evidence, he begins to plan for his life as a free man with his six year old daughter. However, when damning CCTV footage emerges from an incident in London, it isn't long before Shaun finds himself fighting for his freedom once more, only with lies, betrayal and corruption spreading further than he ever could have imagined. With DI Rachel Carey (Grainger) drafted in to investigate in what could be a career-defining case, she must discover if there is more to the shocking evidence than first meets the eye. Rachel will soon learn that the truth is merely a matter of perspective - before deciding what hers is.

With an adamant Shaun battling with his tormented past in order to clear his name once and for all, The Capture looks at a troubling world of misinformation, fake news, and the extraordinary technological capabilities of the intelligence services. In the post-truth era and when criminal justice relies so heavily on video evidence, can we always believe what we see?

Callum Turner says: "The Capture is one of the best things I've ever read and I jumped at the chance to join this wonderful team of people. Shaun Emery is an antihero. He's funny yet wounded, complex, visceral and dangerous. The epic journey he goes on was one I wanted to travel."

Holliday Grainger says: "I am thrilled to be joining the complex and intriguing world of The Capture. Ben Chanan's scripts are totally absorbing - I'm excited to explore the mind of DI Rachel Carey."

Ben Chanan says: "I am thrilled to have Holliday Grainger and Callum Turner leading our cast. As detective and suspect respectively, Rachel and Shaun must grapple their way through a world of deception and moral uncertainty. With Holliday and Callum, I feel blessed to have two such brilliant, dynamic and engaging lead actors taking us on that journey."

Filming will begin next month and further casting will be announced in due course.