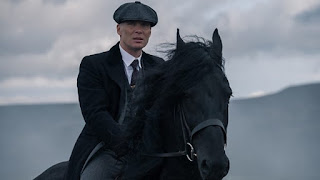 Filming is underway on the fifth series of the acclaimed Bafta award-winning drama Peaky Blinders, which announced its move to BBC One, the nations favourite channel, earlier this year.

The first image has been released of Cillian Murphy (Dunkirk, 28 Days Later) reprising his role as Tommy Shelby in the new series of the acclaimed gangster drama, which began filming in Manchester in September. The drama is written by Steven Knight and is produced by Caryn Mandabach Productions and Tiger Aspect Drama.

Series five of Steven Knight's crime family saga finds the world thrown into turmoil by the financial crash of 1929. Opportunity and misfortune are everywhere. When Tommy Shelby MP (Cillian Murphy) is approached by a charismatic politician with a bold vision for Britain, he realises that his response will affect not just his family's future but that of the entire nation.

Executive producer, Caryn Mandabach, says: "Steve's Birmingham saga becomes more fascinating and more relevant with every chapter. This one promises to be the best yet. I'm truly grateful to the BBC for their support of such thrilling, immersive and resonant storytelling".

Creator, Steven Knight, says: "The story of the Peaky Blinders and of the Shelby family gets woven into the political fabric of Britain and Europe as the 1920's end and the thirties begin. Tommy Shelby faces the darkest force he has ever faced and his struggle is as relevant today as it was then."

Piers Wenger, Controller of BBC Drama, says: "Peaky Blinders is a truly iconic BBC drama and I cannot wait for viewers to see what Steven has in store when the cast, led by the mesmerising Cillian Murphy, return for series five in its new home on BBC One."

The fifth series will be directed by Anthony Byrne (In Darkness, Butterfly, Ripper Street) and will be produced by Annie Harrison-Baxter (Marcella, In the Flesh, The Secret of Crickley Hall).