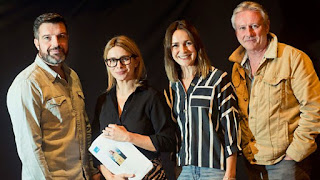 BBC Wales, BBC One and S4C today announce the record-breaking drama Keeping Faith has been commissioned for a second series and is now in production.

Starring Eve Myles (Victoria, Broadchurch, A Very English Scandal) the next series of the thriller will air across the UK next year.

The first series was broadcast in Welsh as Un Bore Mercher, then in English in Wales on BBC One Wales, Keeping Faith received outstanding ratings and the series went on to break BBC iPlayer records. This summer the series was shown on network television across the UK - the first time a BBC Wales/S4C joint TV drama production has gone out on BBC One.

Originally developed by S4C as Un Bore Mercher and as Keeping Faith for BBC Wales, the series was produced by Vox Pictures in association with APC/Nevision and with support from Welsh Business Finance, directed by Pip Broughton and written by Matthew Hall.
Telling the story of lawyer, wife and mother Faith Howells (Myles) as she fights to find the truth behind the sudden disappearance of her husband, series two - written by Matthew Hall and Pip Broughton – joins her as she attempts to pick up the pieces of her life and marriage.

Eve Myles says: "I'm thrilled that this brilliantly written drama found such a place in the audience's heart and I'm so excited to be back in the beautiful west Wales landscape working with a terrifically creative and talented team - it's a joy."

Nick Andrews, BBC Wales' Head of Commissioning, says: "And breathe … Keeping Faith 2 is in production. What happens next to Faith is anyone's guess but what's beyond doubt is Eve Myles' ability to captivate the nation for a second time. We're enjoying an incredible era for Welsh dramas at the moment and this is set to continue. It's a superb example of what's possible when broadcasters such as BBC Wales and S4C work together on projects of scale and ambition. Now where's my yellow coat!"