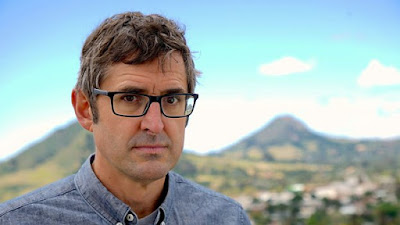 Louis Theroux will return to BBC Two on Sunday 4 November with a new series exploring the unusual ways modern America deals with birth, love and death.

Changing social attitudes and radical new laws have transformed how Americans can experience some of life’s most intimate moments - how we raise children, how we love and even how we die. Twenty years since Louis first hit our screens with his pioneering series Louis Theroux’s Weird Weekends, the award-winning documentary-maker is back with three gripping new films.


Altered States tackles three particularly challenging subjects - polyamory, adoption and assisted dying. What made you want to cover these topics?
Altered States was an attempt to take a look at the most intimate and most difficult sides of life (birth, love and death) in an American context, and specifically ways in which these issues are being handled differently. As a production team, we always tend to look at knotty issues, issues where there is angst, where there is high emotion, where there are wrenching decisions to be made. And within that we became interested in the almost utopian ways in which, in America, they attempt to do things a bit differently. Full disclosure - the series was incubated over a few months and slightly on the fly - we didn’t sit down and think, let's do a three-parter called Altered States. It kind of evolved.

The first one we made was about open adoption. I was interested in the difficulty of mothers handing over their newborn babies for adoption, and then, around the same time, we began talking about the way in which dying is changing in America - and specifically that people with terminal illnesses in certain states can now opt to be prescribed life-ending medication. And then, finally, polyamory came up as a subject. We noticed that all of these, in different ways, were attempts to deal with age-old situations in a new way.


You don’t shy away from covering controversial subjects - what gives you the inspiration and confidence to be so bold in your film-making?
I take on difficult subjects because it’s what I find most interesting, and if anything, it’s in a spirit of self-doubt and anxiety that I tend to take on difficult subjects. In other words, my biggest fear as a programme maker is the idea of either being boring, or presuming on the goodwill of the audience that they’ll want to see whatever I do. That runs completely counter to how I see myself, which is as a journalist and a curious person, but not as an entertainer who is interesting in his own right.

Parenthetically, I’d have to say that the lighter subjects are the hardest ones to do. When you’ve got 60 minutes to fill, you have to have something pretty big that you’re exploring thematically and emotionally. It’s happened in the past where I’ve gotten 30 or 40 minutes into a film and realise, wow – what do we do for our finale? That being said, over the years it has taken time to earn the right to tell stories that are very stressful, intimate and difficult. That’s been a process of learning how to do it. I’ve come from a background where what I was doing was quite tongue in cheek – like Weird Weekends. To go from that into stories about trauma, involving very vulnerable people... it was just a case of learning how to do that gradually.


What were your opinions of these topics beforehand and were they changed at all in making these films?
It’s almost always the case that when you go into covering a story, you have some preconceived ideas. You have an opinion on subjects - whether it’s something like assisted dying or polyamory. And then you immerse yourself in the research and you figure out what you really think about any given subject, based on your values - which for me are more-or-less liberal and humanistic. It would be quite weird to come at a subject as a completely blank slate. And then in the course of meeting people you try and make yourself open to being surprised.

Sometimes it is surprising the ways in which either making a connection with someone, or an argument someone, makes - or just being around someone for weeks slightly tweaks your experience or understanding of it. For example, in the assisted-dying film there are groups that educate people on 'end-of-life options' and telling people how to make devices which will end their life. I went into it in the spirit of 'people should be allowed to do what they want - it’s your life, do what you want with it' – within the law. And then, it was in the act of telling the story that I became more sensitised to the problems with it. So I do go on a journey with the stories.


Many of your works over the years have been set in the United States - what is it about the US that attracts you?
It’s a combination of things. One is the size of the place, the number of people - America is the world's global superpower - and part of that is because there’s money, there’s space and there’s an abundance of strange things happening.

There’s also something in the fact that the American personality tends to be expressive and uncensored and outgoing. And you’ve also got the common language. There’s probably amazing stories in Russia that I would struggle to tell because so many of the programmes I make revolve around shared language. Beyond that, there may be some sort of ineffable American quality to do with ingenuity, utopianism, and the urge to do things a bit differently. That’s a bit harder to put my finger on - but that may be there as well.


What do you hope viewers will take away from Altered States?
As with all my programmes, I’m aware that I’m taking on subjects that are outside the mainstream or involve situations that are, by their nature, imbued with angst or emotional upset. The idea in general is to create a human connection - and that’s the connection that sits between myself and the contributors that allows them to open up and express something that has great meaning for them.

But there should also be a connection with the viewers: hopefully they will appreciate what’s involved in these very difficult decisions and maybe open their minds to different ways of doing things and challenge their own preconceptions. In meeting people who appear to be good people, people who are sensitive and thoughtful and kind but who are doing things in a different, possibly counter-intuitive way, you can go on a journey with that person and open up new perspectives.