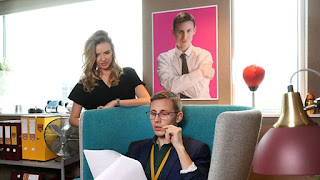 Nadine Coyle joins the cast of BBC Northern Ireland's Soft Border Patrol in a cameo role. The Londonderry-born singer stars alongside comedian Shane Todd as filming gets underway for the new five-part series.

The mockumentary follows the antics of the teams patrolling the often twisting highways and byways of the border on push bike and by car, as they try to help commuters cross the border smoothly and swiftly, if not always successfully.

However details of Nadine's storyline are being kept under close wraps.

Nadine Coyle said: "Being a Derry girl I was always aware of the border, and it's great to get back home, and out filming with Shane and the crew for Soft Border Patrol.

"We've had some craic on location, but my lips are sealed about the storyline. You'll just have to wait to find out what I've been up to!"

Made by the Glasgow-based Comedy Unit, most of the dialogue in the series is largely improvised and performed by a cast, including Karen Hassan, who plays SBP CEO Lisa McCoy, and Neil Delamere as Niall Sweeney, Head of Virtual Border.

The series will be broadcast next year.