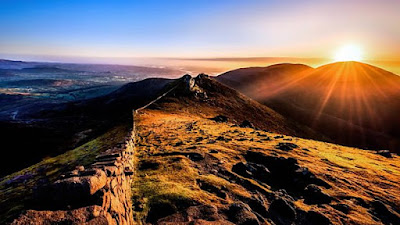 It’s a landscape of epic vistas and breath-taking panoramas. The Mournes is an area of outstanding natural beauty that has inspired writers and artists, providing solace and a livelihood for visitors and those who call it home.

It’s a landscape of epic vistas and breath-taking panoramas. The Mournes is an area of outstanding natural beauty that has inspired writers and artists, providing solace and a livelihood for visitors and those who call it home.

Narrated by Northern Ireland actor Colin Morgan - star of The Fall, Humans and Merlin - a new four-part BBC Northern Ireland series, The Chronicles of Mourne, takes viewers on a journey through the seasons and through the stunning scenery of the magnificent Mournes meeting the people who live, work and play there.

With 220 square miles of enchanted forests and spectacular scenery it is said that the Mournes inspired Belfast-born writer CS Lewis’ magical kingdom of Narnia. Starting on Monday, October 29 on BBC One Northern Ireland at 7.30pm the series, which was filmed over a year, charts a season in each programme, beginning with summer, and meets the people who have fallen under its spell.

Over the four weeks, viewers will be treated to stunning aerial shots and time-lapse photography of the natural beauty of the landscape as the series, made by Waddell Media for BBC Northern Ireland, follows the people who have a special relationship with the area.

The first programme meets a builder who lost his business in the 2008 financial crash. Leslie Hanthorne tells how he overcame personal difficulties by heading to the hills with his camera and his trusty canine companion, Buddy. Now a professional photographer, the Mournes are a special place for Leslie and he thinks nothing of climbing the mountains in the dark or in the depths of winter to get the perfect shot.

Every day - Christmas Day, New Year’s Day, anniversaries and birthdays included - Andy Crory goes looking for moths. Andy is the official moth recorder for Northern Ireland and keeps a record of which species visits his moth trap each day. The dunes of Murlough National Nature reserve are home to more than 700 species of moth and butterfly. The love of wildlife runs in the family - his father Peter is a bee keeper.

Every year thousands of people trek the network of stone paths that have been guiding walkers around the mountains for centuries. It’s now the job of Ranger, Katie Taylor, to maintain them.

One of the area’s most spectacular human endeavours is the 22 mile long Mourne Wall - a listed monument that passes over 15 peaks. Commissioned in 1904 it took 18 years to complete. Now, stone masons Andy and Brian Rooney are leading a team on a major two-year restoration project to repair the wall. The brothers are no strangers to the wall - they are the fifth generation of stone masons - their grandfather helped build the original more than 100 years before.

The series also follows local family the Murphys who have farmed in the shadow of the mountains for generations. It’s a tough landscape and it’s a lifestyle that’s getting harder to maintain and they have to take a gamble and diversify in order to ensure the farm’s survival.

Over the four weeks, the series will also catch up with mountain bikers, the red squirrel officer for the area, wildlife rangers and a father who makes a special pilgrimage each Christmas for his son.
Posted by JD at 11:15