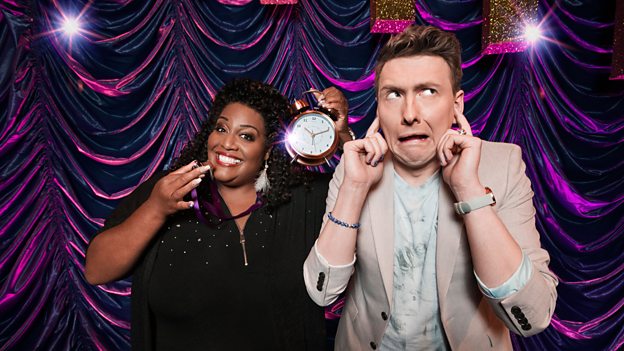 The only quiz in the world where the contestants decide how much time they have to answer the questions...
What takes longer - unwrapping every Werther’s Original in a family pack, completing a Rubik’s cube underwater or deflating an air bed and putting it back into its original box?

These are the kinds of scenarios the contestants must choose from as timers on BBC One’s new Saturday teatime gameshow, The Time It Takes. The challenger who gets the most questions right in their given timescale will be one step closer to winning a dream holiday. But do not fret dear viewers, all is not completely lost for the player with the lowest score, as they will receive a very special The Time It Takes tea-towel before leaving the show.

Award-winning comedian Joe Lycett, described as “the next mainstream stand-up star” by the Evening Standard, will be fronting this riotous new BBC One quiz show with assistance from his referee sidekick Alison Hammond. Made by Hat Trick, one of the UK’s most successful independent production companies, and filmed at BBC Scotland studios in Glasgow, The Time It Takes is set to be a vibrant and gleeful treat of a show, full of organised chaos, jeopardy, judgement and, most importantly, fun and laughs throughout the four action-packed rounds.

Alongside the time it takes Alison to do weird and wonderful tasks, and the downright mundane everyday ones, there will also be a chance for audiences to discover how long it takes some of the UK’s favourite celebrities to enact certain assignments: Ore Oduba, The Sooty Show, Joel Dommett, Debbie McGee, Paul Chuckle, Four Of Diamonds, Jess Wright and Mark-Francis Vandelli all make special studio guest appearances and throw themselves into the chaos of the timers!

Host Joe Lycett says: "Never before has so much relied on someone knowing how long a kettle takes to boil. The Time It Takes is one of the most brilliantly daft shows I’ve ever been involved in - and that’s saying something.”

The Time It Takes is produced by Hat Trick Productions for BBC One. The producer for the series is Meriel Beale and the Executive Producer is Richard Wilson. The new series was commissioned for BBC One by Jo Street, Commissioning Editor of Entertainment and Daytime.

Managing Director of Hat Trick Productions Jimmy Mulville says: “The Time It Takes is a brilliant format which is brought to life by the hugely talented Joe Lycett. It’s both exciting and funny - just what you want at tea-time on Saturdays.”

Series Producer Meriel Beale says: “The Time It Takes is very funny and incredibly silly and happily so is Joe Lycett. I'm very excited to be working with such a star and I've no doubt his warm, generous wit will be lapped up by BBC One viewers.”

The Time It Takes will air on BBC One this Autumn.

Email ThisBlogThis!Share to TwitterShare to FacebookShare to Pinterest
Labels: The Time It Takes