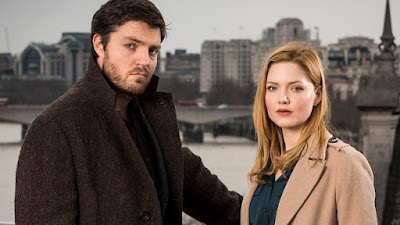 British actors Tom Burke as Cormoran Strike and Holliday Grainger as Robin Ellacott are set to return for a brand new four-part drama in the Strike series, the hit BBC One shows, based on J.K. Rowling’s best-selling crime novels written under the pseudonym Robert Galbraith.

The new Cormoran Strike thriller Lethal White, has just been published in the UK by Little, Brown and is already a number one bestseller.

Fans of Cormoran Strike should expect Tom Burke and Holliday Grainger to lead a number of returning and new characters in the continuation of the hit BBC series.

Strike: The Cuckoo’s Calling, Strike: The Silkworm and Strike: Career of Evil have so far aired on BBC One to the delight of fans of the Robert Galbraith novels and each series was watched by more than 7 million viewers in the UK alone.

Piers Wenger, Controller of BBC Drama, says: “We are delighted to announce that the Strike series will return to BBC One with Lethal White. J.K. Rowling, once more in the guise of Robert Galbraith, has delivered another brilliant, knotty and original crime story. We are honoured to be working with Jo and once more with Holliday and Tom as Robin and Strike, to bring this hit series back to BBC One.”

When Billy, a troubled young man, comes to private eye Cormoran Strike’s office to ask for his help investigating a crime he thinks he witnessed as a child, Strike is left deeply unsettled. While Billy is obviously mentally distressed and cannot remember many concrete details, there is something sincere about him and his story.

Strike and Robin set off on a twisting trail that leads them through the backstreets of London, into a secretive inner sanctum within Parliament and to a beautiful but sinister manor house deep in the countryside.

Burke most recently starred in director Joanna Hogg's latest feature film The Souvenir opposite Tilda Swinton. He previously starred in BBC’s epic War & Peace as Fedor Dolokhov and in The Musketeers as Athos.

Grainger most recently starred in Annabel Jankel's feature film Tell It To The Bees opposite Anna Paquin and Sky Atlantic's Patrick Melrose alongside Benedict Cumberbatch and Hugo Weaving. She previously starred in BBC’s Lady Chatterley’s Lover as Lady Constance Chatterley and in Kenneth Branagh's Disney adaptation of Cinderella.