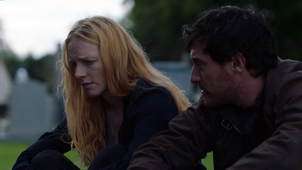 Line of Duty favourite Adrian Dunbar returns to our TV screens in a brand new darker than dark drama, Blood, which arrives on DVD this December following its run on Channel 5, starting on Monday 19 November.

This tense psychological series sees Unforgotten’s Carolina Main in a stand out turn as Cat Hogan, an estranged daughter who must return to the family home, in rural Ireland, following the sudden, seemingly accidental death of her mother.

Made to feel like an outsider who can’t be trusted, by her controlling father, Jim Hogan (Dunbar – Ashes to Ashes, Broken) a local GP, her brother Michael (Diarmuid Noyes – Borgia, The Tudors) and sister Fiona (Grainne Keenan – Titanic, Black Mirror), Cat is thrown back into the fractured family dynamic she’s spent the past 10 years trying to escape.

When demons from Cat’s past start to plague her, she begins to question how her mother died and whether her father is guilty of murder.

Released in its original six-part format, Blood, written by Sophie Petzal (Riviera, Medici: Masters of Florence, Wolfblood), will be released on DVD on 3 December 2018.

This gripping, brooding drama will keep you guessing… Who has Blood on their hands? 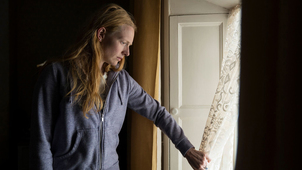 Email ThisBlogThis!Share to TwitterShare to FacebookShare to Pinterest
Labels: Blood