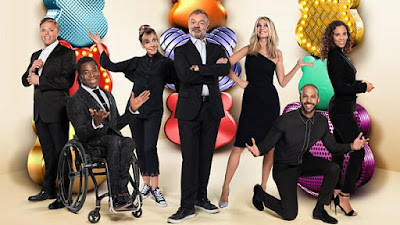 People from across the UK have come together once again to raise a phenomenal £50,595,053 for BBC Children in Need’s 2018 Appeal. The money raised during the evening means that the charity has now raised over £1 billion since the first major Appeal in 1980, all to help make a difference to the lives of disadvantaged children and young people around the UK.

Live on BBC One and Two from 7.30pm on Friday until the early hours of Saturday morning, the 2018 Appeal show marked the crescendo of this year’s fundraising activities for BBC Children in Need with a special night of family entertainment to help raise money for disadvantaged children and young people in communities across the UK.

TV favourites Ade Adepitan and Tess Daly kicked off proceedings, before Mel Giedroyc and Graham Norton took over ahead of Rochelle and Marvin Humes, who were later joined by Rob Beckett. All seven presenters saw the stage came to life with performances from Boyzone, Jamie Cullum, Jonas Blue featuring Liam Payne, and Lennon Stella, Anne Marie and Sheridan Smith. A standout performance on the night saw Jamie Cullum take to the stage for a beautiful and emotive performance of the 2018 official single for BBC Children in Need, Love Is In The Picture. Jamie wrote the single especially for the 2018 Appeal and it is available to buy now.

A very special highlight came from the cast of EastEnders, who spread some movie magic across Albert Square with a delightful Disney medley which celebrated Mickey Mouse’s 90th Anniversary. In what was the most dazzling EastEnders medley yet, the cast took on roles inspired by classic Disney characters whilst performing in The Square. There was also an added sprinkle of Disney animation and special effects bringing extra magic to the scenes.

The 2018 show also saw Boyzone bidding to win the Pudsey Glitter Ball trophy in the Strictly Come Dancing BBC Children in Need special. The special saw the band taking to the dancefloor with the Strictly pros, with Shane Lynch and professional partner Luba Mushtuk lifting the 2018 Pudsey Glitterball trophy.

In a fitting tribute to the charity’s Life-President, the show also saw the presentation of the third Sir Terry Wogan Fundraiser Of The Year Award. The accolade recognises the charity’s fundraisers, of whom Sir Terry was a huge champion, and went to Keeley Browse who has fundraised for BBC Children in Need for many years, putting on charity gala nights for the whole community.

The show also saw the finale of The One Show’s Rickshaw Challenge, as the team arrived at the finishing point in Salford. During the challenge Matt Baker and six inspirational young people who have beneffited from BBC Children in Need funding, cycled the rickshaw 423 miles, from Calais to Salford, raising an amazing £4.3 million along the way.

Another very special moment on the show saw an incredible young girl who has been supported by a BBC Children in Need funded project visit the Doctor Who film set. On the visit she entered the TARDIS and met the entire cast before being surprised by the Doctor herself, Jodie Whittaker.

The 2018 Appeal show also saw world-famous music artists come together for deserving project workers funded by BBC Children in Need. The Project workers being surprised by some of the biggest names in music including Olly Murs, Craig David, Little Mix, Sheridan Smith and Alfie Boe. The artists joined the project workers in song, giving them the opportunity to duet with their musical idols.

Actor and comedian Stephen Mangan hosted a special episode of Mastermind in support of BBC Children in Need. For the first time ever the questions were tackled by pairs made up of four children who have been supported by a BBC Children in Need funded project, alongside a celebrity partner. The celebrity partners included David Bradley, Tony Clay, Steve McManaman and John Thomson.

During the evening, Michael Ball and Jo Whiley came to the stage to announce the Radio 2 fundraising total for 2018, which was led by Chris Evans. The Radio 2 team raised an absolutely phenomenal £9.2 million. The staggering amount of money was raised after a series of fundraising activities including Chris Evans’ extraordinary auction prizes, Carfest, and some of the station’s biggest names lending their support to raise money for the charity.

Celebrities including Rob Brydon, Alesha Dixon, Sue Johnston, Little Mix, Naomie Harris, Keeley Hawes, and Katie Piper reminded viewers about where their money goes with stories of the children and young people who have received support from BBC Children in Need funded projects, thanks to the generosity of people across the UK and their fundraising efforts.


Other highlights of the evening included:
Over 1,400 children came together across ten different UK locations to sing in unison in the Children’s Choir performing A Million Dreams, from the musical The Greatest Showman.

Actors Eddie Redmayne and Zoë Kravitz undertook an interview with Alex Jones for The One Show which took a surprising turn when they were fed answers through an ear-piece by three cheeky school-children.
School Of Rock opened the show with a spectacular medley of exclusive songs.

Call The Midwife stars Jenny Agutter, Helen George and Jennifer Kirby came together onstage to give an exclusive first-look at the Call The Midwife 2018 Christmas special.

Audiences were given an exclusive first-look at Doctor Who’s forthcoming episode.

Straight from London’s West End, there was a fantastic musical performance from the cast of Everybody’s Talking About Jamie.

The total raised for Children in Need Rocks 2018 was announced, an incredible £632,000.
Countryfile presenters John Craven and Ellie Harrison announced this year’s total for Countryfile, a phenomenal £2.9 million.

A whole host of stars including James Argent, Nadine Coyle, Spencer Matthews, Vogue Williams, Greg Rutherford and Georgia Toffolo joined Marvin, Rochelle and Rob for fun and games towards the end of the evening.

Thank you messages to fundraisers and schools across the UK who have pulled out all the stops in their fundraising this year and are currently on track to raise £4.75 million and £5.5 million respectively.


Simon Antrobus, Chief Executive of BBC Children in Need, says: “Once again, people across the UK should be feeling incredibly proud of what has been achieved. The remarkable generosity shown this evening will go on make a lasting difference to the lives of disadvantaged children and young people all across the UK who really do need our help. Thank you!”

Tonight’s total represents an exciting culmination of fundraising activity for BBC Children in Need - but this evening’s total will continue to rise as the money pours in from the thousands of events already held, or scheduled to happen, across the UK. And it's not too late to get involved! Organise a fundraising event or donate at bbc.co.uk/Pudsey or 0345 733 2233.

The BBC Children in Need Appeal Show is a BBC Studios production, executive produced by Clare Pizey and Leanne Witcoop.
Posted by JD at 11:19

Email ThisBlogThis!Share to TwitterShare to FacebookShare to Pinterest
Labels: Children in Need