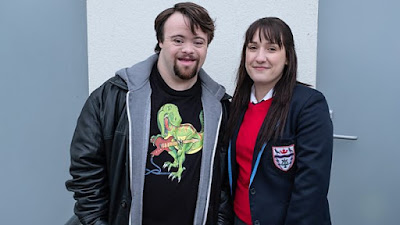 Ups and Downs, one of two stand-alone dramas being made as part of BBC Northern Ireland’s pilot New Perspectives initiative, is currently filming at locations across Belfast and surrounding areas.

Written and directed by Eoin Cleland (Incoming Call), the drama stars Susan Lynch (Ready Player One, Waking Ned, Killing Eve) as the mother to a 22-year-old son with Down’s syndrome, played by newcomer James Martin, and 18-year-old daughter, played by Rosie Barry (Pablo). The two siblings who head off on an entertaining road trip to Belfast to attend a highly anticipated gig without their mother’s permission. Keith McErlean (Vikings, Black ’47) also stars.

James Martin says: “Making this film is good fun, good craic and there’s some good music too. Nothing holds me back when it comes to drama and acting, and my character in the film just wants to get his voice heard and that’s important.”

Rosie Barry says: “I am having the time of my life filming with James and the rest of the cast and crew. You have those moments where you have to pinch yourself and ask yourself - is this really happening? It’s such a heart-warming story and it means a lot to me to get the chance to act in this part, as Eoin has created a great and challenging role.”

Email ThisBlogThis!Share to TwitterShare to FacebookShare to Pinterest
Labels: Ups and Down