Death and Nightingales - Interview with Allan Cubitt (Writer and Director) 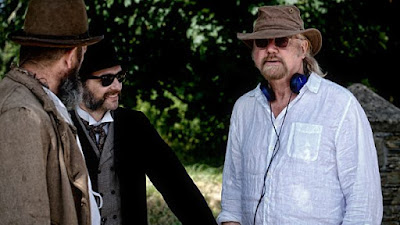 Tell us about the themes of Death and Nightingales?

It’s a complex novel that has at its heart a kind of twisted love story and triangle. It’s essentially about treachery and betrayal and how it impacts on people across generations. It also dramatises relationships across a sectarian divide in Ireland in the 1880’s, it’s a book that also has a lot to say about the political situation in Ireland and does it through this incredibly engaging story of love and hate. It’s an extremely powerful, almost mythic tale in a way.

What attracted you to this project?

I love the book and always felt it would make a wonderful film or TV adaptation. Across the years, Jonathan Cavendish (producer) came back to me and asked what we could work on together; I always said the same thing which was Death and Nightingales. I’ve always felt a great loyalty to Eugene and the book itself. I think it’s a wonderful novel. The quality of the material is the thing that’s made me stick to the project across the years. Working on it as a writer but also as a director is a privilege.

What was it like working with Jamie Dornan again?

I’m a great fan of Jamie’s. He’s told the story many times of how integral I was to launching his career back in the day when we cast him for The Fall. I’m always struck by how good he is. The camera loves him and he looks great on film. Seeing Matthew’s work, from meeting Ann and from working extensively with Jamie I knew I had three actors who were all equally concerned to be truthful and seek out the truth of any scene in any situation. It’s an interesting part for Jamie and he’s a joy on set. He only had one short scene with Matthew which is a shame as they are friends and would have loved to have worked more together but he was incredibly supportive of Ann and makes things easy for the people that he works with.

Matthew is a wonder. He is one of the most technically proficient and professional actors that I’ve ever worked with. He has an incredible understanding of the process and the craft. Lovable and likeable and good natured, who everyone felt was a huge pleasure to work with. He was interesting to cast as we offered it to him and he said yes. I didn’t previously hear his accent as Billy but I had a sense that he is the sort of actor who wouldn’t have taken it if he didn’t think he could do it. I’ve heard his American and hearing his English and other accents I could tell that he had an incredible ear but I was extremely pleased by his version of Billy. He was drawn to the part because of the contradictory nature of Billy’s character, he is complex and interesting and somewhat a monstrous character but interestingly and particularly with Matthew’s performance, he is still a character that people feel for.

What drew you to Ann Skelly?

I was very struck by Ann the moment I met her. I thought she was perfect for Beth and it made me realise, as we auditioned other actresses, that if Beth was not young and didn't have (in some respects) an element of naivety about her, it would be difficult to believe that she would invest her future in Liam Ward.

Ann has an extraordinary mixture as she can look and is very young - but what is remarkable about her performance is that when we flash back to a year earlier she seems younger. She is an extraordinary actress of incredible integrity and range, so for someone so young that has not done an enormous amount of work she was a revelation. I could not be more pleased with her performance and that was reflected in the way that both Matthew and Jamie felt about working with her. I’m excited by the prospect of having the opportunity of presenting her in this role. It’s her film; she is the central role and leads the piece.

Tell us about the writer, Eugene McCabe?

Eugene is a wonderful man. I don’t know him very well but when I was towards the end of The Fall and working in Northern Ireland I drove out to meet him for the first time. I felt I was making a pilgrimage really. He proved to have the spirit that I expected him to have. He was born in Scotland and is now in his mid to late 80’s. Death and Nightingales is his only novel, he is a playwright and a short story writer. His playwriting skill is there in every line of dialogue in the book. I’ve used an enormous amount of his writing. Largely with the adaptation I structured and moved things around. I’ve made a couple of telling plot changes which are right from a dramatist’s point of view but I’ve relied on his descriptions of the world he’s writing about.
Posted by JD at 13:01

Email ThisBlogThis!Share to TwitterShare to FacebookShare to Pinterest
Labels: Death and Nightingales