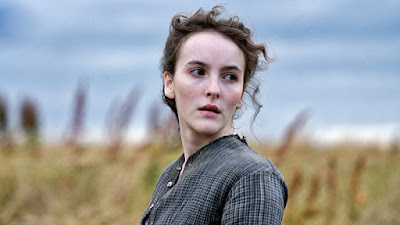 I’ve done two period pieces and I like the costumes and the hair and all those wonderful things and the look of it. I think it’s interesting to work within the confines of a certain lack of expression you are allowed in that time, particularly regarding corsets.

Tell us the story of Death and Nightingales?

I play Beth Winters, she lives in Fermanagh with her protestant stepfather. She’s a catholic, as was her mother who died in tragic circumstances. She’s living under a very constricted environment as it was in those days for women. Liam Ward walks into her life and starts a chain of events where she plans to run away with him.

What attracted you to the project?

I’ve never read a script like it before and I can’t believe that book existed and I didn’t know about it. It’s such a beautiful adaptation by Allan and it’s really remarkable. It’s a different take on a period piece with a young woman at the centre. It’s not just looking over misty hills, there’s a lot of action and terrible things happen.

What was it like working with Jamie Dornan and Matthew Rhys?

To work with Jamie is great as I’m a big fan of The Fall. There’s a lot of craic between takes which is great as a lot of days are very intense. Matthew Rhys is a lot of fun to do the tragic scenes with as sometimes it’s hard to find actors who are so present.

Allan Cubitt has adapted it and directed it too. I really liked The Fall and I think he’s a bit of a genius! He’s so brilliant to work with and lets you act. He’s not intrusive at all; he’s the perfect actor’s director and has the perfect vision for the show. His references are lovely and this feels like a special thing to work on. 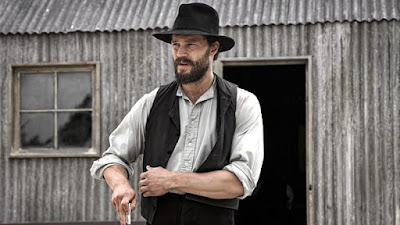 Tell us the story of Death and Nightingales?

Death and Nightingales is a three-part adaptation of the book by Eugene McCabe, adapted by Allan Cubitt (who’s also directing it). It’s a dark drama centred on a relatively dysfunctional family called the Winters. Beth is the protagonist and on the eve of her 23rd birthday, things have culminated and she's at a point where she wants to make a huge decision. I play Liam Ward, who comes into her life a year before and turns it upside down. We don’t know a huge amount about him, he’s quite mysterious and you get a sense that there’s something lurking underneath that isn’t very nice, maybe a little bit sinister. He changes the dynamic of the whole story.

Tell us about your character?

We don’t know what his intentions are but there's an undercurrent of something sinister. He has a big impact on the proceedings of the story from when we first meet him until the end.

Do you enjoy playing complex characters?

You want every character you play to be multi-faceted and complex. Allan and I have history, with me playing one of the most complex characters that I may ever have the chance to play. Anytime you have the opportunity to play a character where there’s more to them than meets the eye you have to jump at it, they don’t come along that often. You see a lot of two dimensional characters on screen but Liam Ward is so much more than that and there’s a lot of juiciness to get stuck into. He was a real treat to play.

What was it like to reunite to work with Allan Cubitt?

With Allan, I didn’t really have to think about working with him again. If he wants me to do anything for the rest of my career then I will do it because in many ways he gave me my career. He cast me in The Fall and he had to very much fight for it. That changed my professional life in a huge way; I’m eternally indebted to him. When Allan came knocking for Death and Nightingales and I knew quite far in advance he was writing it with me in mind and I felt very lucky. I just love him and we have a shorthand and understanding of each other on how we both like to approach the work. It’s invaluable when you work with someone you’ve worked with for six years and it makes things a lot easier on set when he doesn’t have to say much to know what he wants from me. It’s a lovely thing to be back working with him again.

What was it like to work with Ann Skelly?

She’s only 21 and she’s incredible, I feel very old around her! Oddly enough she’d been recommended to me for another project. When I knew they were casting this, I texted Allan to say that he should check out this girl Ann Skelly, I didn’t know a huge amount about her but from what I’d seen she was brilliant. Cut to two weeks later, Allan texts me to say that she was doing it! She’s lived up to the hype and she’s so fun, which is important. She looks unbelievable in every image and I think she’s going to be quite something. She’ll be amazing in this and I think she will be a big deal.

How was the script?

I was very drawn to the script due to the tone and eloquence of it. It has beautiful use of beautiful sounding language in it. I was worried about my American agent reading it as there’s so much slang from the North of the country that even I don’t know all of it, so I thought they are going to think it’s a whole other language. It’s been lovely using that speech - you should only do something if the script resonates with you, as does the character. I’ve been in a lovely position as Allan has been whispering in my ear about it while he’s been writing about Liam Ward - so I knew I was going to like it and that doesn’t happen often. I like the way Allan writes and the words fit in my mouth. It’s very comforting.

Did you enjoy filming back in Northern Ireland?

I love working in Northern Ireland, anywhere in Ireland. The magic thing for me is the crew, as a lot of them worked on various series of The Fall. It’s a huge benefit when you are comfortable with people around you on set, you have a laugh with them and have something personal with each one of them and socialise together. Every job you do feels like a very odd family but when you have history together it’s great - they are a great bunch. I love people from this part of the world; they are the best people in the world!

I’m quite rubbish about coming home unless I have to work, I can count on one hand how many times I’ve been back here since finishing The Fall series three, so it’s been brilliant and seeing parts of the country that I didn’t know existed. The weather has been glorious the entire time and I love the light here, it stays light until 11pm. It helps you to finish your days and it's good for your soul.