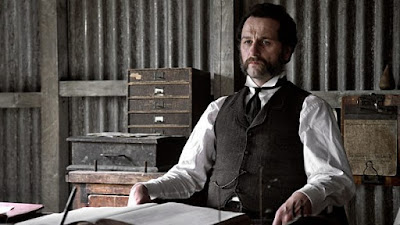 Tell us about your character Billy Winters?

Billy Winters is a number of things - I’m not sure he knows who he is. He’s a very troubled man who lost his wife ten years ago in a horrific accident and raised his step-daughter on his own, sadly we’re not quite sure when, but his feelings for his step-daughter have crossed over into a slightly dark place. He’s wrestling with that along with a number of other things domestically - as Northern Irish Republican terrorist organisations were coming into the fore at that time and posing a number of problems for him.

What was your initial attraction to this project?

There were a number of reasons I was drawn to this one. I hate to say it but it’s true - you are always drawn to a very good script and a dark, complex, interesting character. It’s a huge challenge because I looked at Billy and thought: "Ooh, can I pull this off?" I always liken it to people who do far more adventurous things than myself - you know when people climb Everest and they go: "ah, well". I just wanted to see if I could (I’m not saying that acting is like climbing Everest!) but I just wanted to see if I could pull it off.

What was it like to work with Jamie Dornan?

I’m staggered by Jamie Dornan’s calves. He has calves that a farmer would be proud of. It’s quite a shock. So physically, he’s intimidating let alone any other attribute. He’s kind of perfect for Liam Ward, he’s really stepped into the role effortlessly. You can’t take your eyes off him - well, I can’t. But I’m human. He’s dreamy.

What was it like to work with Ann Skelly?

I always find it slightly embarrassing when actors talk about other actors because we always go: "Oh they are fantastic." But I can sincerely say she is fantastic in this part as Beth. I'm ashamed that I didn't know her body of work before, I'll show my age by saying she's a real find - a young, emerging talent. She has an incredible talent of doing wisdom and innocence at that same time, which is no mean feat. And she can tread water in a Victorian costume in a very cold quarry lake which is commendable.

What do you hope the audience take from the show?

I think as a piece it’s incredibly textured. It’s kind of a love triangle, it’s not, but it is. There are a lot of elements to this one and it certainly made it an interesting read. It’s very layered and my hope is that at the end, as an audience you are torn. Allan has done this beautifully; you aren’t led in one very definite direction. Those pieces for me are always the ones that are the most interesting.

What was it like to work alongside Allan Cubitt?

Having been a fan of Allan Cubitt and his writing for a long time, it was as they say rather crassly, a no-brainer to work with someone like him. Having done the adaptation from the novel himself and then to direct, he has that wealth of information, opinion and knowledge and everything that goes with it is such a help for a director-actor relationship. He’s very astute in his choices. He knows when you need help and when you don't which is a skill.

Did you enjoy working in Northern Ireland?

I think one of the most incredible things of working in Northern Ireland is that you’re a very short distance from any kind of location you need on a very dramatic scale. It’s a little big country in that sense. It has everything you need. It’s one of the nicest crews I’ve ever worked with and I’m not just saying that! You can understand why so many big productions are coming here. They have set up shop where they can offer everything. It’s not home, but for me it’s close to home so that’s a great bonus.
Posted by JD at 13:04