Death and Nightingales - A riveting story of love, betrayal, deception and revenge 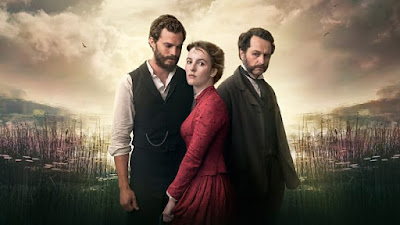 Based on Eugene McCabe’s modern Irish classic, Death and Nightingales is a riveting story of love, betrayal, deception and revenge, set in the beautiful haunting countryside of Fermanagh in 1885 when all of the country is an undivided province of the British Empire.

A haunting tale of love and deception, it is a place where neighbours observe each other and inform; a world of spies, confessions and double dealing; where a pervading sense of beauty is shot through with menace and impending doom.

Made by Imaginarium Productions and Soho Moon, Matthew Rhys (The Americans, The Post) leads the cast alongside Ann Skelly (Red Rock, Kissing Candice) and Jamie Dornan (The Fall, Robin Hood) who returns to the BBC.

Set over a desperately tense 24-hour period, it’s Beth Winters’ (Ann Skelly) 23rd birthday - the day she has decided to join the charming Liam Ward (Jamie Dornan) and escape from her limited life and difficult and complex relationship with her Protestant landowner stepfather Billy (Matthew Rhys). As decades of pain and betrayal finally build to a devastating climax, Death and Nightingales is a powerful and gripping drama that follows a woman struggling to control her own destiny and will illuminate tensions that tear both families and nations apart.

Email ThisBlogThis!Share to TwitterShare to FacebookShare to Pinterest
Labels: Death and Nightingales