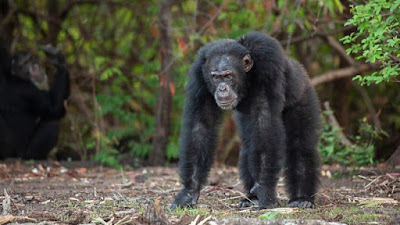 Tell us about Dynasties.

At its most basic, Dynasties is about animal families, and the unique situations where the family has the ability to control and dominate the landscape. These animals live as a pride or a troop or a pack and, if you are the ruler of that family, you get everything. You get all the mating, you get all the food, you are effectively the equivalent of the king. So, it's about the power of family, but it's also about the struggle to become the most powerful within the family.

At its most extreme, as with the chimpanzee film, it's literally about other males trying to topple a king. And at the other end of the spectrum, we have emperor penguins, where a colony of families together help each other survive. It’s a really interesting exploration of the power of family.

Can you explain the popularity of these big landmark BBC wildlife series?

In general, wildlife films are popular because they open peoples’ eyes to a world that they've perhaps lost touch with. These are remote, exotic, dangerous worlds and you see them from the comfort of your own home.

With Planet Earth II in 2016, I think the world was in strange place with a lot going on politically and environmentally, and so people were almost closing in on themselves and their lives. Then this series came along and it showed that there's a whole different side to our world. Through the intensity of the stories, and the way it was filmed, you shared other animals’ trials and tribulations. This somehow put our own trials and tribulations into perspective.

On the flipside of that, they were just joyful. The shows, alongside those trials and tribulations, showed you extraordinary wonder. They made people feel good about their world, and possibly about themselves. That's why they’re so popular.

I think Dynasties is a different piece. Dynasties is a much grittier journey into the natural world, but it's an important one. The animals are extraordinary creatures in their own right and they live amazing lives. But they're also animals that have to share the world and compete with humanity. They are in trouble. There is an environmental subtext to this; all these animals are in decline because there isn't enough space for them. We tell incredibly dramatic stories of these animals living really difficult lives against their rivals, their enemies and each other, and that's hard enough. But when you superimpose them also having their space taken from them by humanity, which adds to the pressure, it almost feels unfair.

I think it will be a very thought provoking series. Hopefully, I think it's going to make people think about our relationship with nature and also what goes on in nature in a way we very rarely see. The realities of these animal’s lives. Sir David Attenborough says these are important films, they're real documentaries. They tell a truth not often told.

How did the idea for Dynasties come about?

I came up with this idea about five years ago. With previous series like Planet Earth or The Blue Planet we normally use a God's eye view of the world. And they're incredibly popular, but I felt we'd done a lot of them. I wondered if there was another way of telling the stories of the natural world. We never really spent time with the animals or understood the real depth of their stories.

We never really focused on seeing this moment in time where the animals are at a fork in the road, where their lives will change fundamentally depending on which direction they take. Of course, it's quite a dangerous thing to embark on; if nothing of interest happens, you've got nothing to make a film. Say you're making Planet Earth II and you spend three months trying to film a lion hunt. If it doesn't work, it doesn't matter because you can go and film a tiger hunt or something instead.

But if you decide you're going to spend all your efforts on just one particular chimpanzee troop, and specifically one individual, and the animal dies or nothing happens or filming permissions change, you're completely stuck. It's quite risky, and Sir David Attenborough said he thought we were mad. But while the risks were high, the potential benefits were also very high because if it works, the drama – the potential for true drama – is unprecedented.

In my pitch, I said, "If these work, you will feel like you're witnessing a true Shakespearean drama." Because often it is! Mother against daughter, sister against sister, loyal subject against king. Of course, like Shakespeare there are moments of humour too - these are, in the end, all uplifting, life-affirming films.

Without too many spoilers, what are the moments you hope will have a particularly big impact on viewers?

Every film has very moving moments, where you see heroic struggles against the odds. There are also extraordinary moments of connectivity where you absolutely empathise with the animals.

In the chimpanzee film, there’s an extraordinary moment where the king’s underlings gang up against him. They attack the king - he is known as David - and effectively overthrow him. In the morning, a crew came back and found David dead. Or so we thought.

I can’t tell you what happens next, but what I can tell you is that it is one of the most extraordinary passages of drama I have ever seen in a wildlife documentary.
Posted by JD at 10:06