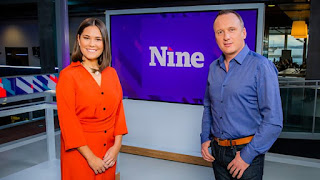 The first official pictures of The Nine set have been released, highlighting the look of the news hour which will launch on the new BBC Scotland channel in February 2019, bringing national and international news to audiences across Scotland.
The Nine set is a permanent open-plan studio space on the third floor at BBC Scotland's Pacific Quay, Glasgow headquarters and the programme will be anchored by two of the country's leading journalists, Rebecca Curran and Martin Geissler.
Hayley Valentine, Editor of The Nine, reveals plans for the news programme: "The Nine aims to be a world class programme combining international, UK and Scottish news with the needs of a Scottish audience at the heart of everything we do. We hope to bring the audience the best of the BBC both from Scotland and around the globe, plus some exciting new on screen talent.
"We want to bring audiences stories they won't find anywhere else. We are looking at fresh, creative and engaging ways of telling stories that matter to Scottish audiences."
The flagship news programme will be at the heart of the schedules, broadcasting Monday-Friday between 9-10pm in addition to weekend bulletins. Rebecca and Martin will co-present Monday-Thursday while Laura Miller and John Beattie will present the news hour each Friday.
Weekend coverage comprises a 15-minute bulletin on Saturday evenings at 7pm followed by a 45-minute review programme presented by Fiona Stalker and Nick Sheridan. On Sundays, the 15-minute 7.00pm bulletin will be presented by Lucy Whyte. The programme will have a distinct social media presence and audiences will be able to access the best of The Nine on digital platforms.
Rebecca Curran says: "I am thrilled to be a part of this programme. It is an amazing opportunity for me personally and professionally, at what is such an exciting time for broadcasting in Scotland. The Nine will have a real focus on original journalism, and the whole team is looking forward to bringing our audience a fresh format with stories they won't see elsewhere."
Martin Geissler adds: "It's been fascinating watching The Nine grow from concept into reality. What we're offering is something completely different, a bold new programme with its own unique character and personality, covering international news in a style that's accessible to everyone.
"We're assembling an exciting team of journalists, our newsroom is currently buzzing with enthusiasm, ideas and ambition. I just can't wait to get started."
The Nine is part of the biggest investment in the BBC in Scotland for a generation. This investment includes 80 new jobs in news services in Scotland, covering a range of roles both in front of and behind the camera. Journalists have been hired across the whole of Scotland, enhancing news teams at Holyrood and Westminster and, for the first time in 20 years, BBC Scotland will have a dedicated Europe Correspondent.
Posted by JD at 15:54