Hollyoaks: will Russ and Mercedes get married? 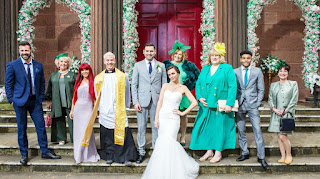 Secrets, lies and a Serial bride… Mercedes McQueen has planned the perfect wedding with the love of her life Russ Owen. what could possibly stand in their way…

Goldie and Sylver McQueen are supporting Mercedes on her big day, but will either of them cause any trouble? The family went to Magaluf this summer for Mercedes' hen do, and ex-convict Sylver was finally reunited with first love… the bride to be. After she had a row with Russ, Sylver and Mercedes ended up sleeping together. They've managed to keep it secret for months, but there is no denying the chemistry between the pair.

More recently, Goldie discovered the affair and told Russ the truth, only to feel guilty about upsetting her brother, forcing her to take it back. Russ is insecure and doesn't know what to think, and in the heat of the moment, sleeps with Goldie... and gets her pregnant! He freaks out once he discovers the news and persuades her to have an abortion. Mercedes is determined to find out who knocked up her little cousin, and Goldie uses Joel as a scapegoat for the baby daddy.

It's the big day, Mercedes is determined to make this wedding the best one yet… unfortunately it's off to a rocky start as the priest cancels last minute. Cleo asks Joel to ordain the marriage, unaware that Goldie's put the baby daddy blame on him.

Russ catches his wife-to-be gobbing off to the photographer, and they sneak off to the love boat for some pre-wedding passion. After a heartfelt speech from Myra, Mercedes is ready to get married.

She is a vision of beauty as she walks towards the church, but her face turns to stone once she spots Joel at the end of the aisle. Meanwhile, Janet Street-Porter and Linda Robson sneak in and wind up their disposal cameras, ready for a good show.

Her anger increases as she walks closer to Joel, a man she believes got her cousin pregnant and forced her to get an abortion. As the ceremony starts, Mercedes, never one to shy away from a fight, can't seem to control her anger… Will this be her most explosive wedding yet?

Tune in to Channel 4 at 6pm on Friday 16th November (6.30PM E4 first-look on Thursday 15th) for an hour long special episode, and watch the drama unfold…