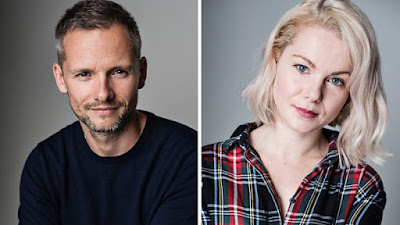 Former EastEnders heartthrob Jack Ryder and Olivier Award nominee Amy Lennox are due to join the cast of the long-running medical drama Holby City next year.

Jack says: “I am delighted to be joining Holby City and look forward to working with such a talented group of people. I can’t wait to give a voice to this exciting new character and serve a show that people love.”

Amy says: “I’m thrilled to be joining Holby as Chloe Godard and working with such an amazing cast and crew over at BBC Elstree. Chloe has some really great storylines coming up that I can’t wait to share with you all. So excited!“

Simon Harper, Executive Producer of Holby City and Casualty, says: “We’ve been talking to Jack for a while to find the right part for him on Holby and his powerful, nuanced audition for Evan blew us away. He’s both a household name and a superb actor, and fans who remember him as Jamie in EastEnders are in for a big treat and quite a surprise seeing him in this very different role. Evan is a complex, alpha surgeon who makes some major waves in Holby. ”

“It’s so exciting to welcome Amy to the Holby family and see this leading West End star burst onto the scene in her first big TV role. Her performance as the strong yet deeply vulnerable Chloe is terrific as she brings to life this fascinating, multi-layered character at the heart of a huge story for 2019.”

Audiences will already be familiar with Jack from his EastEnders reign as Jamie Mitchell. Prior to joining Holby, Amy has appeared as a guest cast member in Casualty and Shetland - as well as performing in the original West End casts of Legally Blonde and Kinky Boots.
Posted by JD at 11:47