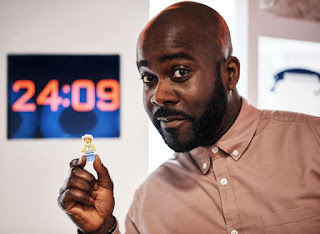 What's the show about?

Lego Masters is a search for Britain and Ireland's best LEGO builders. The teams can be anyone – a father and son, two best friends from school, last year's series we had two Cambridge university students. It's a varied mix of people who are all essentially passionate about LEGO!

How are the contestants chosen?

We did auditions at the start of the year. There were literally hundreds of people who came together in teams of two. Each team was set two challenges which would test team work, creativity, imagination and skill. The auditions allowed us to whittle down the applicants to eight teams who are the contestants for this series.

You mention there are a lot of family groups – do you think that's part of the attraction of LEGO -that it's something families can do together?

Definitely. My experience of LEGO was at my cousins'. My Auntie Theresa and her son Leon and daughter Beverley, she was always very educational and if she was buying you a toy it had to be something that was teaching you something at the same time. It's a toy, but at the same time building can be technical and creative so it was a toy celebrated in my family. A few of the teams on the show also happen to be family members and you can see that LEGO is somethings that helps to bring them even closer together.

Working with the contestants day after day, do you develop favourites?

It's a very interesting when you think about other competition based shows, I've been lucky enough to be a competitor on Strictly Come Dancing and a presenter on The Xtra Factor but LEGO MASTERS is a different kind of world.

Everyone's really supportive of each other. I remember on the first series one of the girls had a break at the last minute on her build and some of the other guys jumped in and helped carry their piece across the build room. The same sort of thing happened this year where two of the younger contestants who had a bit of trouble towards the end and some of their competitors jumped in to help them find some vital pieces. There's a real community spirit which is another thing I love about the show. Although a team gets eliminated every week, there are often tears from other contestants. It's been quite an interesting thing to be part of as by the end of series we turned into a miniature family

The cast are so heart-warming and you will you fall in love with every one of them. They are a really unique and eclectic group of people.

It's unusual to have kids competing against adults in any forum, why do you think it works on LEGO MASTERS?

With the adults they've got the experience but there's nothing you can do to beat a child's imagination. We've got Matthew Ashton, who has the best job in the world, and something that he loves in the Build Room is when someone does something imaginative or unique. Quite often our younger teams excel in this department.

Once again, you've got a host of guest judges. Who's lined up for this series?

We've got Paddy McGuinness, Rob Beckett, Johnny Vegas, Chris Ramsey and Sue Perkins and they all love LEGO. Chris Ramsey, I had no idea how much he was into LEGO. He was a superstar on set. He kept bringing out his phone and showing photos of his Death Star and the kids were like "Wowsers!". His passion for LEGO was unparalleled. Paddy was great as well – he has kids who he plays LEGO with. And also this year we've made a LEGO MASTERS Christmas special, which is really exciting.

Did you learn anything that surprised you from presenting the first series?

When I did the first series I was a bit worried as I didn't really know that much about LEGO. I remember the producers saying "Melvin, we want you to be the eyes of the audience", because not everybody knows what a "two by four" or "SNOT method" means. I'm there to help the viewers out really. Plus I think they loved my enthusiasm. I think this year whole show has really stepped up a gear and I'm so excited for everyone to see it!

Are there any fundamental differences between this series and Series One?

We have an amazing new judge, Fran Scott, who is a science expert and also specialises in engineering. In terms of structural building expertise, she's completely across it. Matthew is great when it comes to creativity and design but when it comes to the actual science behind the builds, Fran's got the eye for that.

Do you have a favourite task this series?

We had a task where the teams had to make their own full-sized crazy golf course and their own golf clubs. The really fun part was it had to playable and that's where I came in. We went to a real golf course and they had to take their builds from the build room and set them up on the course. It was quite a task and everyone had their own theme.

People get really emotional this series?

It's understandable when people get emotional. When you watch the hour long show, you don't see all the work that has gone into the builds and the hours of actual building that takes place. Some of the teams will go home and plan stuff and test things out to try in the build room. You can understand what it's like putting a lot of work into something and finding out you haven't quite made it through to the next round of the competition. When it comes around to the end of the competition, I always joke around and say "Why can't we let everyone win?", because our finalists are so passionate about it. They put their all into it. It's not like reality TV where they're there to be famous or they want to be on TV. They are there because of their passion for LEGO.

Do you have your own all-time favourite LEGO set?

When I was a kid there wasn't a specific set I loved. I don't think I ever had anything like a Death Star or anything like that. I was a big fan of cars – I still am. I always loved making cars from bits and pieces I found. I think that's the beauty of it – you can buy a set and build it, but then break it down and make something else altogether.