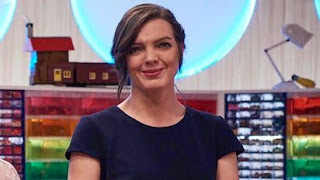 LEGO MASTERS is back with a brand new judge. Scientist and engineering expert Fran Scott joins Matthew Ashton, Vice President of Design at The LEGO Group, to set the tricky challenges the teams will face in the new series. Read these interviews with both judges ahead of the series hitting our screens.

Listed in The Progress 1000 London's Most Influential People, Fran is the Science Content Developer at The Royal Institution and an experienced TV expert presenter. A scientist by training and an engineer at heart, Fran uses her knowledge of these subjects to explain their principles in entertaining, exciting andaccurate ways often using high-impact demonstrationsto prove her scientific point.

Struck by the lack of female scientist role models on television, Fran set about changing that. After working behind-the-scenes for many years on hit programmes such as Richard Hammond's Blast Lab, Bang Goes the Theory and Horizon, Fran made the move to in-front of camera. She has since presented eight series for Children's BBC, six series for BBC Learning Zone and one for BBC Worldwide. For Fran, science and entertainment is at the heart of what she does and this seems to have struck a chord with those wanting informative and yet engaging factual programme, with her shows becomingsuccesses across the globe and receiving numerous recognitions including a RTS award and three BAFTA nominations. She is best known for her playful (and often fiery) demonstrations on the CBBC show Absolute Genius with Dick and Dom.

Aside from television, Fran also bring science and engineering to the stage. She has written and performed hundreds of science stage shows, and knows only too well the demonstrations, narrative and humour needed to make a show not only enjoyable, but also educational. She is often commissioned to write bespoke shows and over the years has presented on-stage with many well-known names including Richard Hammond, Prof. Robert Winston, Prof. Brian Cox, and, of course Dick and Dom! She has built up a solid reputation for being the go-to girlwhen funny, entertaining and yet informative science is needed on stage, with her company Great Scott! Productions recently taking commissions from Google for Education, CBBC and Mishkat Science Centre (Saudi Arabia).

You're the Science Content Developer at the Royal Institution. What does that entail?
My thing is science demonstrations – I come up with visual ways to show scientific ideas. I head up the team that does all the demonstrations at the Royal Institution, which was established in 1799 as a place to show science to the public. We've been associated with 15 Nobel prize winners and the discovery of 10 chemical elements. Nowadays, we build on our heritage and use shows, demonstrations, talks and videos to encourage the public to think more deeply about science and their place within it. You probably know us from the Christmas Lectures. It's my job to build the demonstrations for those lectures- taking them from concept through to execution.

You're a judge on the new series of LEGO MASTERS. Why was that something you wanted to get involved with?
My job is just sort of a big version of what they do on the show, I think about something, design it and then build it. I wanted to get involved to show that people will build and innately they know principles of engineering and physics, but they might not actually completely understand them. They know how to use them, but they may not even realise they're using them. When you're building something and it's leaning to the left, you build something more up the right of it. You might not understand why. That's where I come in. I was so enthusiastic about getting on board because I love the programme and I'm passionate about engineering, so the idea of helping them understand why things are built in certain ways was really interesting for me. With LEGO, it's not just about how it looks, it's also about how it works, and I'm all about how it works.

So are you more interested in the scientific qualities of the build, or do you enjoy the aesthetic side of it as well?
I'm very much interested in how it works, how it stays up, how fast it turns… that sort of thing. I do assess how it looks as well, but my tastes are slightly different from [fellow judge] Matthew's [Ashton]. I like a bit of concrete grey, whereas he's about the colours. I'm very much function over fashion.

You're working with these people for days after day – do you develop favourites?
Oh, I do, but I couldn't possibly say who!

Is it difficult to be objective when you're judging, then?
No, not at all, actually. There was one team who thought a lot like me, and had the same likes as me, so when they designed something, I always liked the feel of it. But it was surprisingly easy to judge objectively, because you have to. This means a lot to people, it would be unfair to do anything else.

It's quite unusual to have kids competing against adults in any forum – why do you think it works here?
It totally works. I had my doubts, and was nervous about judging the kids. But the judging criteria takes into account aesthetics, function, story-telling as well as other criteria. On some aspects the adults had an advantage, on others (such an imagination) the kids completely outshone the adults. This meant, when it came to the judging, it was a completely level playing field, and surprisingly enough, it worked.

You've mentioned you have somewhat different taste to Matthew. Did you ever fundamentally disagree with him about who to put through?
Surprisingly not! There were bits where I would come to a build, and I would say my piece, and he'd say "Oh, I hadn't thought of that." And then he would say his piece, and he would highlight things that I hadn't seen. So we may have had different approaches and opinions, but that allowed us to help each other see a fuller picture, and we both ended up drawing very similar conclusions. It worked really well actually. There were some really hard decisions to be made, though. Not everyone could go through.

How was it working with the guest judges?
Some of them were more involved than others, in terms of having very strong opinions. Some of them just didn't want to say anything nasty, and just said that they loved them all – we were like "You can't do that…" Some of them absolutely adored LEGO, and had seen the whole of the last series and would remember things that had happened. They were all unique, and all brought something different to the programme. And if they felt differently from us about how someone had done, they made sure we knew about it.

Do you have a favourite task in the forthcoming series?
It's between two. The Crazy Golf round was incredible, the sheer ambition of it. They each had to design and build a hole that would become part of a crazy golf course, so it had to have both fun and mechanics involved, and had to be transportable over to a golf course as well, so that gave it added jeopardy. I loved the sheer scale of the challenge, everyone upped their game and really went for it. Some of the things they produced were incredible. And I loved the teamwork that came out. There was one team that was running behind, and another team that had finished helped them. That was one if the elements that I loved about LEGO MASTERS: Yes, there was competition, and yes they all wanted to win, but they were not going to be mean in order to get there.

And what was the other round you liked best?
The arcade game, where each team had to design a working machine that you would find in an arcade. One team built a version of my favourite machine of all time, the 2p machine that shuffles the coins backwards and forwards. You've got to watch that episode just to see what happened to that one in the end. It didn't all exactly go to plan. And one team built a working pinball machine that totally worked and gave out prizes. One team built a hook-a-duck, with a mechanical element. One team built a massive 3D labyrinth, with all the moving parts. It was the next level of builds.

Are you a LEGO fan yourself?
I am. Nowadays I don't get to build with plastic bricks, I build with bits of wood and metal, but as a kid I absolutely loved it. I was a bit of a stickler, I didn't really branch out. I built what was on the instructions. But as a full-time maker now, it gave me that bug, and that sense of achievement of starting from nothing and ending up with something you've made.

Why do you think it has been such a successful and enduring brand?
A few reasons. It is very accessible, it's at the cheaper end of the toys, and it's attainable. You can start with small bits. And you can be guided, if you want that, or you can do without instructions, and let your creativity flow, so it can suit every need. There's not many toys where you can either do exactly what you want, or get a certain outcome by following precise instructions. And, with LEGO, the fact that anything is possible. You can build a castle or a boat or a goldfish. As human beings, we love to create, and we get a rush and a sense of satisfaction from building something from nothing.

People get really emotional in this series, don't they? It really, really means a lot to them.
It really does. There was one chap in particular who wants to work for Lego, he wants this to be his career, and he's very, very skilled at it, and it was heart-breaking when he didn't get into the next round. And it was hard, because we all got very close. Sometimes it wasn't the fact that they were leaving the competition that was sad, but that they weren't going to get to hang out with their tribe anymore. They're still in touch, and they still meet up. It was a whirlwind of emotions, and they loved it all so much. It was more about the experience coming to an end than anything else for them. And Matthew's a crier, and if anyone cries around me then I'm a crier! So it was chaos at times.