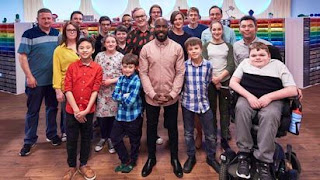 LEGO MASTERS is back and even bigger!

From thousands of applications, eight of the best amateur brick building duos in the British Isles are ready to pit their skills, creativity and imaginations against each other in a series of challenges, to claim the title of LEGO MASTERS CHAMPIONS 2018. Melvin Odoom hosts as the teams do battle in the iconic Build Room.

This year there's a new addition, as scientist and engineer at heart Fran Scott joins as regular co-judge alongside Matthew Ashton, The LEGO Group's Vice President of Design.

Meet the contestants hoping to scoop the trophy in the most colourful competition on television.

OLLIE
AGE: 10
HOMELIFE: Ollie lives on a farm in Cornwall with his mum, dad and older brother.

BACKSTORY: School friends Harry and Ollie are full of beans and are mad about LEGO. Harry is always surrounded by LEGO and his creations take up nearly every room in the house, as well as in the garden. From small 30 brick challenges to builds that are weeks in the planning and building, Harry only stops when he's finished. He even dreams in bricks and often starts the day with a plan for another build inspired from his dream that night. The boys became friends after they both realised that they love bricks as much as each other. After watching the first series of LEGO MASTERS the pair set up their own LEGO after-school club where they based some of their tasks on their favourite challenges from the series. In the build up to the competition the boys asked classmates to donate LEGO so that they could practice for the competition. Harry is the planner and Ollie is the more 'see how it works out' approach, so together they make a great team and most importantly have such a giggle and fun building together. This is their dream come true to be in the Build Room on LEGO MASTERS and their love for Lego is infectious to watch.

Catherine and Patrick - sister and brother

BACKSTORY: Patrick and Catherine are very close siblings. They both attend an Irish speaking school. Patrick will start secondary school in September. Their shared love of LEGO gives them a great way to connect, together they can make new worlds and challenge each other to create new vehicles and buildings. After seeing the first series, Patrick and Catherine knew that they would make a great team and it's a dream come true to be part of the second series.

Paul and Lewis - father and son

PAUL
AGE: 48
HOME LIFE: Paul live at home in Leeds with his wife, Julie, 2 sons and pet dog.
JOB: Paul works for the Royal British Legion as a Handyman – having previously spent 10 years in the Royal Artillery.

LEWIS
AGE: 17
HOME LIFE: Lewis lives at home with his mum, dad and older brother, Jack. He attends school and is currently doing his A-Levels.

BACKSTORY: Father and son team, Paul and Lewis have been into LEGO ever since Lewis was old enough to hold it. Both Lewis and his brother, Jack, have the genetic Morquio Syndrome – a rare degenerative bone disorder that caused their spines to stop growing when they were just three years old while their limbs continued to grow. It is known to affect around 100 people in the UK at any one time and Lewis has weekly infusions of a synthetic enzyme to help stave off further degeneration. LEGO has been Lewis's most consistent friend and something that he has mastered over the years. Lewis is also the captain of his school's table top cricket team!

Stuart and Izzy - father and daughter

IZZY
AGE: 13
HOME LIFE: At school Izzy loves building and racing Formula 24 Greenpower cars, playing Oboe and being the goalie in Lacrosse. She lives with her Mum, Dad and younger sister in South London.

BACKSTORY: Father and daughter team, Stuart and Izzy, have always used LEGO as a way of bonding when Izzy comes home from boarding school. Being the only girl in her all-girls class to play with the brick, Izzy is very much aware that she is flying the flag for all girls who play with the iconic brick. Stuart, who was Dame Shirley Bassey's Musical Director for 6 years, tells us that 'when Izzy is building I see something in her that I saw in myself when I was her age…LEGO really brings out the inner child!'

Jayden and Kato - nephew and uncle

BACKSTORY: Uncle and Nephew team, Jayden and Kato, have come together for the competition. Kato, who works as a successful architect boasts a huge LEGO collection that consists of mostly one off, vintage LEGO sets. He estimates he has a couple of million bricks hoarded in his garage - and is very protective over his sets. Jayden's mum describes her brother and son's relationship akin to brothers. When Jayden isn't begging his Uncle to let him play with his vintage LEGO collection, he can be found creating his own LEGO animations and winning junior chess competitions!

BACKSTORY: The brothers of the competition, Chris and Joseph come from a big family. Growing up, the siblings were often found in the loft building a LEGO city, complete with trains. It was always Chris's dream to have an outdoor railway so when he was 16, he approached his parents to ask if he could install one in the back garden. Their response was 'yes – if you do it properly'. Joseph helped Chris in his quest and ten years later it's grown and developed – and rather taken over the whole garden. Living 200 miles apart from each other as adults means they don't get to build together anymore – so this competition is their chance to rekindle their love of building and relive their childhood.

BACKSTORY: Prior to the LEGO MASTERS application process, Tom and Nathan didn't know each other– and applied separately and were paired together to create a team after both were unable to find a suitable partner at home (i.e. someone that loves LEGO as much as them). Tom is LEGO crazy, and has been since he was very little. Tom has recently completed studies in art & design, 3D design and photography and will be heading to university in September to hopefully get closer to his dream of being a LEGO designer. Nathan, on the other hand first picked up LEGO in 2015 after getting a free set in a newspaper – from there he was hooked.

Adam and Odette - husband and wife

BACKSTORY: Adam and Odette met working at a bar at university, they have been married for 8 years. They live together in Hertfordshire and have 2 children together – their youngest son is named Emmet after the main character in the LEGO Movie. They admit that although their lives can be very hectic they can always make time for LEGO after the kids go to sleep! Their wedding had a LEGO theme, including a LEGO cake topper and an assortment of 80 unique, mini build, MOCs ('my own creations' in LEGO-speak) that they built, photographed and then deconstructed, for the guests to build while waiting for food to be served!