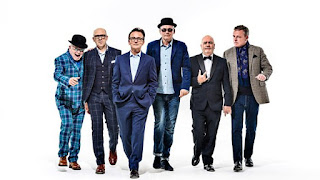 Welcome to BBC One's night of fun for New Year's Eve! Great British Pop band Madness are set to brighten up the night with a live concert on BBC One, performing their biggest hits as they kick off the New Year celebrations.
The Madness story began in Camden Town in 1979 with a group of young boys making music. They are now one of the top 20 selling UK groups of all time and will be celebrating their 40th Anniversary in 2019. Madness have a huge number of hit singles under their belt including My Girl, House Of Fun, The Prince, and over six million album sales to their name.
Band members include Graham 'Suggs' McPherson, Lee 'Kix' Thompson, Mike 'Barzo' Barson, Chrissy 'Boy' Foreman, Daniel 'Woody' Woodate, Mark 'Bedders' Bedford and they continue to entertain fans with their tours of great British institutions, from Buckingham Palace to Glastonbury, to the 02 to closing Television Centre and beyond!
Madness are really excited to be performing at the New Year's Eve concert - they say: "Hold onto your sofas, your chaise lounges, your couches - NYE and Madness, it's going to go off like a packet of crackers... what a ding dong ding dong... "
Jan Younghusband, head of BBC Music TV Commissioning, says: "We are so delighted that Madness will head up our New Year Celebrations this year on BBC One - and with the Kingdom Choir too - will have us all up dancing in our living rooms to the early hours to welcome in the year ahead."
As well as music from Madness, London's famous fireworks will light up the night sky over the River Thames as Big Ben strikes midnight. The spectacular firework display will be choreographed to fit a specially edited medley of music before the action switches back inside as Madness continue the party with their much loved anthems.
There will also be a special treat for viewers to witness a unique collaboration with Madness and The Kingdom Choir as they perform together. The Kingdom Choir are a London based collective best known for their unforgettable performance at the Royal Wedding for the Duke and Duchess of Sussex.
A limited number of tickets for the event will go on sale on Friday 30 November.
Please visit bbc.co.uk/newyearseve  for further details.
Posted by JD at 15:55