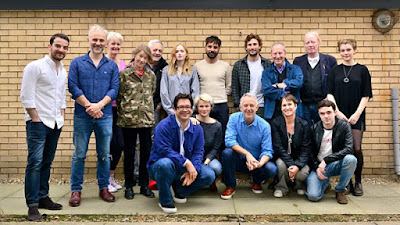 The screenplay follows the tragic life of 16th century monarch, Mary Stuart; from exile to reign, to demise, and was developed with Jay Presson-Allen (The Prime of Miss Jean Brodie, Marnie, Cabaret). Originally Mackendrick imagined Mary Queen of Scots as a western, a portrait of a woman trying to survive internecine battles for power between rival clans; but he also described the screenplay as "a gangster study".

Mackendrick first began the film’s development whilst at Ealing Films in the 1950s, but studio head Michael Balcon vetoed it as "too disrespectful of royalty." Later, at different points, Mackendrick worked on drafts of the script with Gore Vidal and Anthony Burgess. By 1969 Mary Queen of Scots was due to start production, backed by Universal Studios and with Sandy Lieberson producing. When this was derailed Mackendrick followed a new opportunity in a teaching position at California Institute of the Arts (CalArts). Whilst he never completed his final film project Mackendrick will be remembered for pivotal cinematic works including The Ladykillers and Sweet Smell of Success.

For this radio adaptation, director Hope Dickinson Leach and producers Dancing Ledge Productions have collaborated with the film’s intended producer, Sandy Liberson, and the Mackendrick estate. Glenda Jackson narrates, providing a theatrical parallel given her role as Elizabeth I in the 1971 BBC Two television drama series Elizabeth R. Bridging the generations of acting talent, Jackson is joined by stage and screen actor Ellie Bamber in the role of Mary Stuart. The cast for Radio 4’s production also includes Mark Bonnar as Scottish politician William Maitland, Emun Elliot as Bothwell and Kerr, and as Darnley, Edward Holcroft.

Alison Hindell, Radio 4’s Commissioning Editor for Drama and Fiction says: “Once again Radio 4 brings a script to life which may have otherwise languished in the archives. Mackendrick’s Mary Queen of Scots has a notable trio of brilliant women both in front of and behind the microphone and follows other unmade movies successfully adapted into radio dramas, including those by Arthur Miller, Orson Welles, Harold Pinter and Dennis Potter.”

Laurence Bowen, Producer, Dancing Ledge Productions, says: “Alexander Mackendrick’s very personal take on Mary Queen of Scots, set over just one treacherous year, presents us with an extraordinary portrait of the young twenty three year old Queen. Isolated, pregnant, betrayed yet still with a steely intelligence and instinct for survival that, for a moment, seems to triumph over the two warring gangs of men that surround her. It’s been an honour to bring it all to life.”

Glenda Jackson says: “I love radio, it’s my favourite medium - because you never have to learn your lines or wear make-up.”