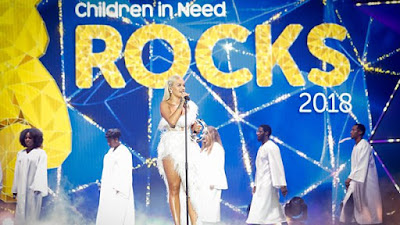 Presenters Fearne Cotton and Clara Amfo and performers All Saints, George Ezra, Jess Glynne, Nile Rodgers & CHIC, Olly Murs, Tom Odell, Rita Ora and Sir Rod Stewart will take to the stage for a spectacular night of entertainment in Children in Need Rocks 2018 coming to BBC One, 15 November at 8.30pm

A glittering array of covers will feature as part of the concert, recorded on Wednesday 7 November at The SSE Arena, Wembley, including never-before-seen performances especially for Children in Need Rocks 2018 from All Saints who will perform The Police's Message In A Bottle and Jess Glynne covering Hard To Handle by Otis Redding

BBC Children in Need has revealed the surprises in store for audiences ahead of the broadcast of Children in Need Rocks 2018. The unmissable show, produced by BBC Studios, will see presenters Fearne Cotton and Clara Amfo and performers All Saints, George Ezra, Jess Glynne, Nile Rodgers & CHIC, Olly Murs, Tom Odell, Rita Ora and Sir Rod Stewart take to the stage to help raise money for the charity. What’s more, the concert will treat viewers to some of the world’s biggest names in music performing a variety of classic tracks and covers. The concert is coming to BBC One on 15 November at 8.30pm.

The show will see stars perform current tracks as well as a surprising cover or one of their classic hits. Covers being featured include:

An exclusive performance by All Saints of The Police's much-loved hit Message In A Bottle
Jess Glynne’s interpretation of soul music legend Otis Redding's Hard To Handle, especially for Children in Need Rocks 2018
A re-imagination of George Michael's iconic song Freedom, performed by Rita Ora
George Ezra will cover Rudimental's 2018 hit These Days
Viewers will see Olly Murs cover Justin Timberlake’s Can’t Stop The Feeling and Rock Your Body
Tom Odell will treat the audience to his version of True Colours by Cyndi Lauper
Classic songs performed on the show will include Sir Rod Stewart’s Maggie May and Nile Rodgers & CHIC’s Le Freak.

Speaking of the televised concert George Ezra said: “I hope people tune in and donate to Children in Need Rocks 2018, it’s all for a great cause.”

Speaking of her exclusive performance, Jess Glynne said: “I’ve always been a huge fan of Otis Redding and Hard To Handle is one of my favourite songs. I don’t normally sing covers but I feel like this will be a fun one to sing!”

Commenting on the upcoming broadcast, Shaznay Lewis from All Saints, said: “We can’t wait for viewers to see our cover of The Police's Message In A Bottle - Children in Need Rocks 2018 will be the first time we’ve ever performed it. We hope people across the UK are encouraged to tune in and help raise some money for disadvantaged children and young people across the UK.”

Olly Murs commented: “Children in Rocks 2018 is unmissable TV, a fantastic line-up all coming together to raise money to help support children and young people experiencing disadvantage in the UK.”

Speaking on the night of live show Nile Rodgers said: “I feel amazing about being here for Children in Need Rocks 2018!”

BBC Children in Need is currently supporting 2,700 projects in communities across the UK that are helping children and young people facing a range of disadvantages such as living in poverty, being disabled or ill, or experiencing distress, neglect or trauma. The show will also share moving stories from some of the children and young people, who are experiencing disadvantage around the UK, and have been supported by projects funded by BBC Children in Need, as the concert raises money for the good cause.

One of the stories shown during the concert is Connie’s: Connie, aged nine from Cumbria, has Metachromatic Leukodystrophy (MLD). Due to this cruel degenerative condition, Connie has lost the ability to walk or talk but she can still hear. As such, music has become increasingly important to her. Connie and her family have been attending Sunbeams Music Trust’s music sessions for four years. The sessions, which are currently funded by BBC Children in Need, provide interactive music, dance and British Sign Language (BSL) children with life-limiting illnesses, and complex needs. Attending the sessions allow Connie to express herself, without judgement, through the powerful gift of music.

Viewers will be invited to donate to help raise money for the charity and all proceeds after costs will benefit BBC Children in Need.

The spectacular show is in aid of BBC Children in Need and will be broadcast on BBC One, 15 November at 8.30pm.
Posted by JD at 11:25