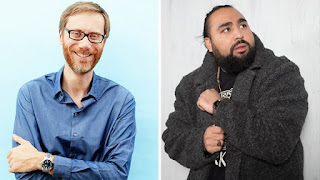 Stephen Merchant (The Office, Extras, Hello Ladies) and Asim Chaudhry (People Just Do Nothing) star as two mismatched neighbours driving across the country to pick up the one toy that will make a little girl's Christmas dreams come true.

But will they get there before the shops shut for the festive season? Can they make it back in time for Christmas? And will they manage to avoid driving each other crazy along the way?

Click & Collect is a 60' comedy film written by Joe Tucker and Lloyd Woolf (Witless, Big Bad World, Parents) and directed by Ben Palmer (The Inbetweeners Movie). It's a co-production between BBC Studios and Mondo Deluxe and will air on BBC One this Christmas.

It's Christmas Eve and Andrew Bennett (Merchant) has somehow failed to buy the one present his six-year-old daughter really wants - Sparklehoof the Unicorn Princess. Unfortunately, it also happens to be the must-have toy of the season, and he can't track one down in London for love nor money. Step forward his irritating, over-friendly neighbour Dev D'Cruz (Chaudhry), who reveals he's managed to track down the last one in the whole of the UK. The only problem? It's 300 miles away, up in Carlisle. And it's click and collect on Dev's credit card.

Andrew has little choice but to set off with his annoying neighbour on a long-haul drive as he desperately tries to save his daughter's Christmas and redeem himself as a dad. For Andrew, it's a nerve-fraying nightmare; for Dev, it's the best road-trip of his life.

Throw in a whole load of unexpected obstacles along the way, and if they want to make it back in time with the toy in hand, it's going to take a proper Christmas miracle.

Asim Chaudhry says: "I've been a huge fan of Stephen's work for many years so it's a dream to be working with him! I'm also over the moon about the fact that my ten year old sister can finally watch something I'm in that's family friendly and wholesome, lol.'"

Shane Allen, Controller, BBC Comedy Commissioning, says: "Stephen and Asim are absolutely knockout together in a script bursting with comic incident, hilarity and heart. It's a family comedy treat for your Christmas stocking."

Chris Sussman, BBC Studios' Head of Comedy, says: "We're thrilled to have Stephen back working with the BBC again, and teaming him up with the brilliant Asim is the best Christmas present we could have asked for. Thanks Santa!"

Joe Tucker and Lloyd Woolf, Executive Producers for Mondo Deluxe, says: "In our first outing as Mondo Deluxe Productions we're delighted to be partnering with BBC Studios - and to have Stephen and Asim on board is an absolute dream! Working for a good chunk of the year on what we hope will be a real festive treat has been a joy (not to mention a genuine insight into what it must be like to be an elf)."

Filming for Click & Collect will start in November. It is a BBC Studios/Mondo Deluxe co-production for BBC One, produced by Sam Ward and Executive Produced by Chris Sussman on behalf of BBC Studios and Joe Tucker and Lloyd Woolf on behalf of Mondo Deluxe Productions. The Commissioning Editor for the BBC is Gregor Sharp.