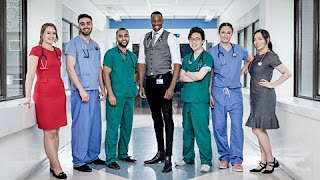 Seven new Junior Doctors are scrubbing up for a fifth series of the award-winning BBC Three show, with filming starting at Salford Royal Hospital today.

For the very first time, the series will film over the winter months - a notoriously busy and stressful time of year for healthcare professionals.

The series will follow the first and second-year junior doctors as they deal with a range of heart-breaking, heart-warming and challenging situations at one of the UK’s top performing hospitals.

From A&E to Geriatrics, it will see them put on the frontline whilst on rotation, giving viewers a glimpse into both their professional and personal lives along the way.

Following a BMA survey, which found one in ten junior doctors take time out of training due to their own health concerns, this series will be a revealing look at the reality for some of today’s young doctors, as they try to establish themselves in one of the most high-pressured and competitive working environments.

Damian Kavanagh, Controller of BBC Three, says: “At BBC Three we aim to celebrate the passions and experiences of young people and in the new series of Junior Doctors we get a rare glimpse into one of most exciting and daunting experiences of a young person’s life; launching their career in a high pressured environment. All told through their eyes, it promises to be a roller coaster ride for our Junior Doctors as they grapple with what the busy Christmas and winter period throws at them.”

Kate Phillips, Controller of Entertainment Commissioning at the BBC, says: “Hospital life can be unpredictable enough, but filming over Christmas adds another layer to this series. I’m looking forward to seeing how our junior doctors cope and hopefully rise to the many daily challenges they will face. Winter is definitely coming!”

Junior Doctors (4x60’) was commissioned by Damian Kavanagh, Controller of BBC Three and Kate Phillips, Controller of Entertainment. Max Gogarty is the Commissioning Editor for the BBC. It is a BBC Studios production, executive produced by Kelly Sparks and Kat Lennox, and series produced by Harjeet Chhokar. It will air in 2019.
Posted by JD at 14:55