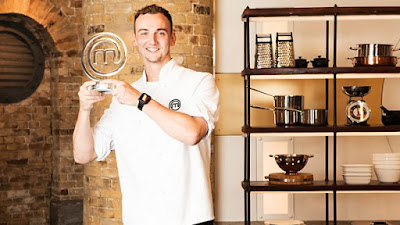 Taking on 47 fellow professional chefs in the pursuit of culinary perfection, Laurence battled through seven weeks of fierce competition and extraordinary cooking in the demanding challenges. As well as impressing Michelin-starred chef Marcus Wareing, renowned chef Monica Galetti and MasterChef’s seasoned judge Gregg Wallace, Laurence also received critical acclaim throughout the series. Bringing food critic Jay Rayner to a stunned halt when he said, “I have absolutely nothing critical to say” whilst critiquing his lamb dish during The Critic’s round. Further acclaim came from Paul Ainsworth in Knockout Week, who titled Laurence 'man of the match' when the contestants cooked at his restaurant in Cornwall. Whilst during The Chefs’ Table, after Laurence’s lobster and dumpling dish was served, Lisa Goodwin-Allen said, “It puts a smile on your face…it is beautiful”, Michael Wignall called the dish “stunning” and Glynn Purnell was reduced to just one word, “wow”.

Reacting to his win, Laurence says: “It has been a really long journey, I have certainly learnt a lot about myself and found my feet. With this kind of ending who knows what the future holds; it is just so exciting. Hopefully though this is the first step in the long road to the chef I want to be one day.”

Monica Galetti says: “Laurence is a chef who cooks from the heart. He is such a talented chef and the world is his to conquer. He has confidence and a true understanding of flavour. What a future this young chef has.”

Marcus Wareing says: “The food Laurence has cooked for us during the competition has been outstanding. He is inventive, creative and he leaves nothing behind in the kitchen. He gave it his all and his work ethic and professionalism is fantastic, as a chef you couldn’t ask for more in the kitchen. In my opinion he is the next generation.”

Gregg Wallace says: “For a chef so young he is an immense talent. He has a hunger for knowledge and he is willing to push himself until he accomplishes greatness.”

The gruelling Final Week saw Laurence up against exceptionally tough competition in fellow finalists Dean Banks, 30, and Oli Martin, 30. Laurence fought to prove his passion, grit, imagination and technical ability beyond that of his competitors throughout increasingly demanding tasks, which pushed all their culinary skills to their upmost limits.

The challenges included: designing and preparing a menu for the heavyweights of modern gastronomy from around the world with 24 Michelin-stars between them; travelling to Valence, in France, to cook at one of the world’s most exciting and innovative restaurants and learn from Anne Sophie Pic, one of the world’s leading chefs with three Michelin-stars and the fourth generation of one of the greatest cooking dynasties the world has ever seen.

The ultimate, final task was to create an exceptional three-course meal for judges Marcus Wareing, Monica Galetti and Gregg Wallace in three hours. Laurence, who pushed himself to the max with his winning menu, which he said reflected “the most accurate representation of the food he wants to be cooking”, started with a Hand-dived scallop, marinated cherry tomatoes (inspired by his time with Anne Sophie Pic), roast tomato dashi, strawberries and coriander oil seasoned with sansho pepper. His main was Loin and belly of suckling pig, kimchi glaze, braised fermented hispi cabbage hearts, Nashi pear puree and sliced pears. Dessert was Aerated mint white chocolate, lemongrass and coconut ice cream, passion fruit ripple and caramelised white chocolate crumb.

Marcus Wareing, commenting on Laurence’s main pork course said: “Every now and again in a competition we all eat a dish that we will never forget. That is absolutely outstanding.”

Laurence, who grew up in Nottingham, has always been interested in food from a young age. His love for cooking led him to train as a chef at the Ashburton Chefs Academy in Devon.

On his MasterChef experience, Laurence says: “I had thought about entering the competition for a few years but this year I felt my knowledge, skills and confidence were finally at a level that could see me through. The Chefs’ Table was my most challenging moment of the competition. I have always pushed myself and given myself a lot of work to do, but during this challenge I pushed too hard, and almost didn’t make it!

“Winning the show is a dream come true. It has been the goal from day one and I’m ecstatic I’ve managed to get all the way to the end.”

Speaking about his plans for the future, Laurence says: “I still have a lot to learn in my current role so I don’t plan on moving on any time soon. I am exploring the possibility of opening my own restaurant in the future, however before all this I plan on having a bit of time off and travelling.”

Please note that applications for MasterChef: The Professionals, 2019 are now open.
Posted by JD at 13:05