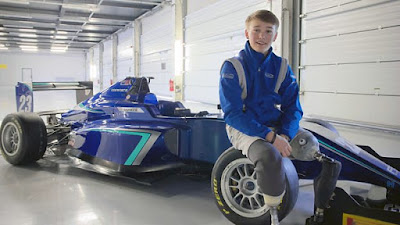 British racing driver Billy Monger will receive the Helen Rollason award at this year’s BBC Sports Personality of the Year.

His life changed forever in April 2017 during a British F4 race at Donington Park. A terrible crash, while travelling at 120mph, left him with life-altering injuries and resulted in amputations to both of his legs at the age of just 17.

Spurred on by the support of the motorsport industry and the general public, Billy showed sheer grit and determination by returning to the racing world in March of this year at the British F3 Championship - less than a year after his devastating accident.

Making his debut in the event, he took fifth in the first qualifying session of the season and went on to seal a brilliant third-place podium finish. He ended the season in sixth position overall in the standings.

Director, BBC Sport, Barbara Slater says: “Billy truly embodies what this award is all about – overcoming adversity and triumphing during times of immense struggle. I am looking forward to watching this remarkable young man collect his award on the night and watching his undoubtedly bright future unfold”.

The Helen Rollason award recognises outstanding achievement in the face of adversity and was introduced to the show in 1999 in memory of BBC Sport journalist and presenter Helen Rollason MBE who lost her battle with cancer during that year, aged 43.