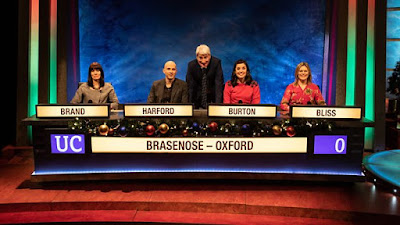 Christmas University Challenge is returning to BBC Two, with the 2018 line-up featuring over 50 prominent alumni from 14 universities and university colleges.

Each team will compete in one of seven first round matches, after which the four teams with the highest winning scores will face each other in two semi-finals. The winners of each of those ties will then face each other for the series crown.

Produced by ITV Studios, the series begins on BBC Two on Monday 24 December, at 8.30pm, with the first of this year’s clashes between Brasenose, Oxford and Bristol.