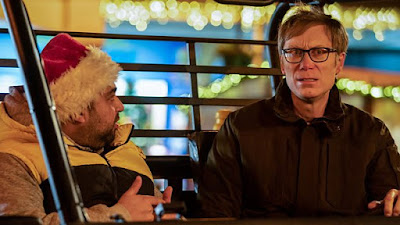 It’s a one-off comedy film in which my character, Andrew, and his overbearing neighbour, Dev, have to take a road-trip on Christmas Eve to collect a toy unicorn for my young daughter. Everything that could go wrong, does go wrong. It’s very funny, but sweet too. Asim Chaudhry and I have a great rapport.

I play an uptight middle-aged man with glasses - it’s a real stretch for me.

Are there any similarities between you and Andrew?

I’m a bit like Andrew, in that I can be intolerant if someone rubs me up the wrong way. I like meeting new people, but I don’t want to be stuck with someone unless I’ve vetted them first, and know I like them. I dread the idea of being stuck on a long journey with a bore.

Andrew doesn’t appear to be the biggest fan of Christmas. Do you share the same feelings about Christmas?

Andrew gets antagonised by Christmas - whereas I like this time of year. Andrew is sick of the same old songs on the radio, whereas I love hearing Stop The Cavalry for the hundredth time. (I really do). He thinks we should just wait until the New Year sales to buy gifts, when they’re cheaper, whereas I understand it’s just not the same. I like seeing my niece and nephew excited about what Santa has bought them on Christmas morning.

Dev means well, but he is exhausting company. He is so child-like and over-excited.

I was excited to work with Asim because I suspected he and I would have a great rapport, and we do. He’s hilarious. I love his show People Just Do Nothing. Of all the The Office rip-offs, it’s one of the best.

Would you ever go to extreme lengths to get a present for someone?

I find the secretive nature of gift-buying very stressful. Wracking your brains trying to guess what someone might want, then surreptitiously buying and hiding it from them, then waiting nervously to find out if they actually like it when they open it. And if they don’t, they then have to hide the fact from you. So much lying and deceit involved in gift giving. I much prefer it when people tell you what they want. Even better if they buy it for themselves and just ask for the money.

I received a Lego airport when I was a kid and played with it for years. I loved creating entire stories surrounding that airport. There were hijackings, crash landings and pay disputes among ground staff. It was very exciting.

What’s the best Christmas present you’ve ever given?

It’s not for me to say what the best gifts were that I’ve given, but I think I’ve been surprisingly thoughtful over the years. I once got my dad a flight in a Spitfire, which he was thrilled about.

Have you ever been on a crazy road trip?

I was acting in a film being shot in Atlanta, in the US. One night, me and few other actors weren’t needed, so we went out to dinner. I had a Georgia guidebook with me, and on the cover was a picture of a beautiful, leafy avenue of trees. I happened to ask the waitress where it was, she guessed it was somewhere in Savannah, so on a whim the other actors and I borrowed a car and set off on an impromptu road trip to find that exact avenue of trees. We drove through the night, got pulled over for speeding by a traffic cop, sweet-talked our way out of a ticket, arrived in Savannah, found the one hotel with rooms, then next morning kept asking locals until we tracked down the exact avenue of trees. We took a picture just like the one on the cover of the guidebook, drove all the way back to the same restaurant, and showed it to our same waitress from the night before. She didn’t seem that excited. But we were very pleased with ourselves.

What are your plans for Christmas this year?

I’ll spend Christmas with family. I love cooking, so I’ll probably collaborate with my mum on the Christmas lunch. Maybe I’ll brine the turkey. I feel that’s what Nigella would do.

Have you ever had a disastrous Christmas?

I’ve been very lucky. No disasters at Christmas. Although I do remember one year my family were having Christmas dinner, and my sister and I started arguing about whether Jesus is really the son of God. My mum got cross and said: “Stop talking about Jesus! Christmas Day is not the time for it!” 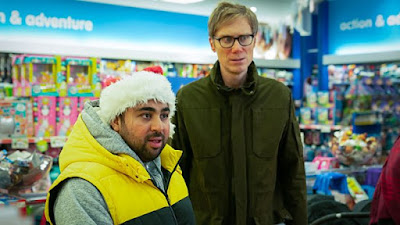 Dev is one of the most annoying people you will ever meet yet also one of the most loveable. It’s a weird combination but ultimately, he is a loveable loser and his intentions are always good.

Did you draw any inspiration for your character from anyone you know?

I had a neighbour who literally lived opposite me in an apartment complex. One of my deliveries got sent to his flat and he knocked on my door to give it to me. As he opened the door, he recognised me off the telly and his face lit up. This was the start of my real life Click & Collect experience. He could see me from his living room window, so every time I was in my kitchen he would wave to me. It was all very intense. I started putting my blinds down to avoid him. He was a lovely guy but I did seriously consider moving.

Do you share any similarities with your character, Dev?

Definitely. I can be VERY annoying at times but I’m somewhat self-aware (only somewhat).

Working with Stephen was a joy. He’s one of my comedy heroes and he became like the really tall, white, Bristolian brother I never had!

Have you ever gone to extreme lengths to get a present for someone?

My ten year old sister wanted one of those Hatchimals a few years ago and I remember getting a £65 Uber in rush hour to go to an Argos. It took me three hours. It’s like Click & Collect but like a really boring, lazy version.

How would you cope with spending that much intense time with someone as annoying as Dev?

I avoid intense, annoying people at all costs. If I see someone I know who annoys me I will go out of my way to avoid them. I will miss trains and buses, I am that committed.

The best Christmas present I’ve ever received was a WWF ring with Bret The Hitman Hart and The Ultimate Warrior. I would spend hours playing with myself, not like that. I would create intricate back stories for the toy figures. I was a weird kid.

What’s the best Christmas present you’ve ever given?

The best Christmas present I’ve ever given was that bloody Hatchimal for my sister. She played with it for a week and then she was done with it! That’s three hours of my life I’ll never get back.

Have you been on any disastrous road trips before?

I regularly tour with Kurupt FM and I’ve had many hellish road trips. The worst gig we ever did was in Swansea. We showed up and there were 40 people at this pub. They didn’t know who we were and the mics didn’t work. I had to do an impromptu stand up set and got a drink thrown at me. The promoter didn't even pay us and when we left the venue and on to the street there were three police cars, two fights happening and a woman crying on a bench. It looked like a renaissance painting.

What are your plans for Christmas this year?

I have a white side of my family, so we have an Asian/British fusion Christmas. My cousin does a turkey and my uncle does a spicy leg of lamb. We have crackers and poppadoms - it's very progressive.

What’s the best Christmas you can remember and what made it so special.

The best Christmas ever was when I was quite young. I really wanted a Sega Saturn, I was moaning about it for months. My dad, who worked as a taxi driver at the time, did a night shift from 9pm-6am to earn some extra cash and when I awoke there was a Sega Saturn under the Christmas tree! 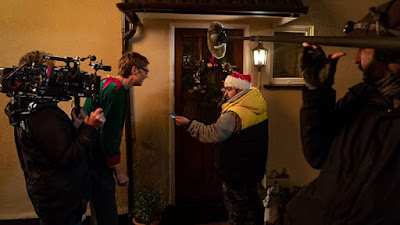 Click & Collect is about Andrew, an uptight father, who finds it increasingly difficult to get in the Christmas spirit. He fails to buy his six year old daughter’s main Christmas present - Sparklehoof the Unicorn Princess - only to discover, on Christmas Eve, that the shops are all sold out. Step in Andrew’s insufferable neighbour Dev - a man so enthusiastic about Yule that he’s taken it upon himself to festoon both his and Andrew’s houses in neon lights. Dev manages to buy, by click and collect, what may well be the last Sparklehoof in the UK - but here’s the rub: it’s 300 miles away. With no other options, Andrew and Dev embark on the road trip of a lifetime. For Andrew it’s a nerve-testing nightmare; for Dev it’s the beer they never got to round to.

How did you come up with this storyline? Is it based on any personal experience?

This really did happen to us! The only difference is - it wasn’t a ford, it was a millpond.

So you’ve been on a crazy road trip?

See question two. Other than that, I once drove up the west coast of North America but it was just a pleasant holiday. (Fully recommend everyone take the Pacific Coast Highway from Carmel to Mendocino).

Did you draw any inspiration for the characters from anyone you know?

The characters are loosely based on a couple of friends of ours: Andrew and Dev. There are of course potential legal implications here but we’ve covered ourselves by changing their surnames.

What made you choose Stephen and Asim for these roles?

Stephen and Asim both had that magic combination of very funny, publicly adored and available for the shooting dates.

What would you do if you ended up with neighbours like Dev or Andrew?

If you lived next door to Andrew it probably wouldn’t be too bad - you’d never hear much from him - but you might get the occasional anonymous note to trim your hedge. Dev on the other hand would be a very different beast - probably a case of embrace wholeheartedly or move county.

Could you spend that long in a car with someone like Dev?

We both practice TM (transcendental meditation) but, even with that in our kit bag, it would be a real test of trying to hold on to the notion of “future anecdote”.

Have you ever gone to any extreme lengths to get a present for someone?

We once made a TV producer a large Battenberg which we cabbed across London from the poor bit to the rich bit (top tip there on how to get ahead in the industry). Otherwise, we consider any trip to a major department store in December ‘extreme lengths’.
Posted by JD at 13:18