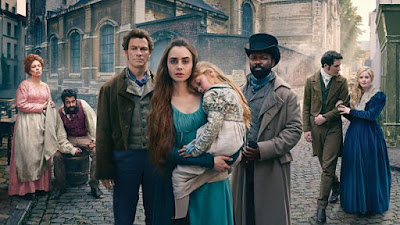 Adapted by the award-winning screenwriter Andrew Davies (Pride And Prejudice, War And Peace), this landmark drama airing on BBC One has gone back to the novel and delved deep into the many layers of Hugo’s story, revelling in Jean Valjean and Javert’s cat-and-mouse relationship, against the epic backdrop of France at a time of civil unrest.

The cast also includes Adeel Akhtar (The Night Manager, Murdered By My Father, Utopia) and Olivia Colman (Murder On The Orient Express, The Night Manager, Broadchurch) as Monsieur and Madame Thénardier, Ellie Bamber (Nocturnal Animals, Pride and Prejudice And Zombies, The Nutcracker and The Four Realms) as Cosette, Josh O’Connor (The Durrells, God’s Own Country, Ripper Street) as Marius and Erin Kellyman (Raised By Wolves, Uncle, The Coopers Vs The Rest) as Éponine.

Mona Qureshi is executive producer for BBC One, Rebecca Eaton for Masterpiece.

Delegate producer for Czar Film and TV is Eurydice Gysel, and the series is produced with the support of Screen Flanders and Screen Brussels.

Produced by Chris Carey (Apple Tree Yard) and directed by Tom Shankland (The Missing), the drama was commissioned by Charlotte Moore, Director of BBC Content.

Filming took place in Belgium and Northern France and it will begin on BBC One on Sunday 30 December at 9pm.