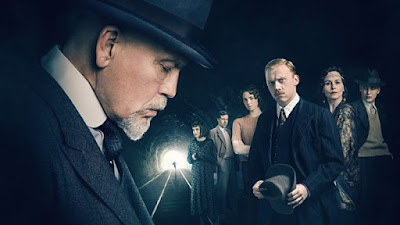 Poirot is back on our television screens, in a new adaptation of one of his most exhilarating cases. Widely regarded as one of Agatha Christie’s best mysteries, The ABC Murders is one of the most surprising and unusual appearances by literature’s most famous detective.

The year is 1933 and a killer stalks Britain, known only as A.B.C. They strike in a methodical pattern and leave a copy of the ABC railway guide at the scene of each of murder. As Poirot (John Malkovich) attempts to investigate he is thwarted on every front; by a police force that no longer trusts him, a public that no longer adores him, and an enemy determined to outsmart him. If Poirot is to match his most cunning nemesis everything about him will be called into question; his authority, his integrity, his past, his identity.

In her fourth Agatha Christie adaptation in conjunction with Agatha Christie Limited and Mammoth Screen, Bafta-nominated writer Sarah Phelps continues to explore the 20th century through the work of Britain’s greatest crime writer. This time it is the 1930s; a divided country where suspicion and hatred are on the rise, and the gap between wealth and poverty is great and growing greater.

In the midst of this we find Hercule Poirot and his little grey cells. Poirot has aged and the world has changed quickly around him. England, tolerant, welcoming England, squeezed by Depression, by the dark news from Germany, isn’t as tolerant and welcoming. The jubilation of winning the Great War has evaporated, now all there is, is a mess. Someone has to take the blame and sympathy for Displaced People has run out. As the British Union of Fascists gains ground, inveighing against ‘aliens’, Poirot feels even more like the outsider that he is. Even worse, he has been swept aside by the new brooms in the police and forgotten by the Bright Young Things whose dinner parties he entertained. But somebody has not forgotten him.

The A.B.C. killer travels the length and breadth of Britain to taunt Poirot. The ominous rumble of the train tracks connects every sinew of the country, every corner of opulence and poverty bound together. As Poirot tracks the killer across a riven, tense England, the case peels back the layers of the persona he’s created to survive in a foreign land, surrounded by strangers where the only person who seems to truly understand him, is the deranged, uncontrolled killer.
Posted by JD at 15:54

Email ThisBlogThis!Share to TwitterShare to FacebookShare to Pinterest
Labels: Poirot