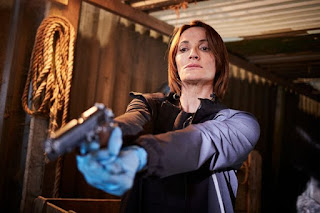 Sarah Parish returns as Bancroft in a second series of the psychological thriller from Tall Story pictures. Written by Kate Brooke.

Sarah Parish (W1A, Broadchurch, Medici) returns to the role of ruthless Elizabeth Bancroft in four powerful new episodes of Bancroft, created and written by Kate Brooke (A Discovery of Witches, Mr Selfridge, Ice Cream Girls, The Making of a Lady).

Directed by Lawrence Gough (Doctor Who, Snatch), the new series opens with Bancroft at the height of her career. The drama focuses on her continuing success and her enhanced reputation as a ‘good cop’.

However, her success comes at a price. She’s isolated and estranged from her beloved son, Joe (Adam Long), facing increasing pressure as a result of her dangerous pact with crime boss Daanish Kamara (Ryan McKen) and is forever under the watchful eye of Superintendent Cliff Walker (Adrian Edmondson) who strongly believe she’s corrupt and should be exposed as such.

When Joe is implicated in a disturbing double murder case, Bancroft’s personal and professional life come crashing down around her. She is determined to protect her son, but in doing so finds herself up against a chilling new antagonist. With threats closing in from all sides, the repercussions of her past actions will come back to haunt her in ways she could never have expected.

Sarah Parish commented: “I’m absolutely thrilled to be returning to the role of Bancroft and inhabiting her complex life which Kate has crafted so well. Bancroft is such a contentious anti-heroine and as a character she offers me so much to work with. Manipulative and strategic with her thinking she knows how to get what she wants. The question is, what will this cold-blooded killer do next in order to defend her son?”

Kate Brooke added: “Bancroft is a character who has lurked in the dark recesses of my imagination for many years. I am delighted to be bringing her back to the screen.  Series two is a ferocious female driven tale where Bancroft, brilliantly played by the awe-inspiring Sarah Parish, meets her match.”

Patrick Schweitzer commented “After the overwhelming audience response to the first series Tall Story are delighted to be working with Sarah Parish again to bring back Kate Brooke’s fantastic love to hate character Bancroft.”

The first series of Bancroft was one of ITV’s best performing dramas of 2017 with a series average of 6.7 million and a 25.1% share of the available audience.

Email ThisBlogThis!Share to TwitterShare to FacebookShare to Pinterest
Labels: Bancroft