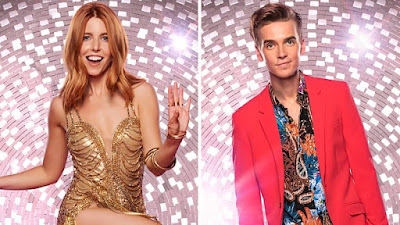 2018 Strictly Come Dancing winner Stacey Dooley and fellow finalist Joe Sugg are set to present the New Year’s Eve concert broadcasting live from London on BBC One featuring British Pop sensations Madness.
This unmissable New Year’s treat will broadcast live from Central Hall Westminster and Madness will kick things off with a selection of hits plus a unique collaboration with the Kingdom Choir. Then it will be time for the big countdown to the clock striking midnight and fireworks will fill the night sky lighting up London over the River Thames. The action then heads back inside as Madness carry on the party with more music promising an unforgettable night of fireworks and fun on BBC One.

Broadcaster and presenter, Stacey Dooley says: “2018 has been such a fantastic year for me, working on some hard hitting documentaries as well as Strictly, has been a real treat. Presenting with Joe Sugg at the New Year’s Eve concert with Madness is the perfect ending to such a great year!”

Social Media sensation Joe Sugg says: “I’m so excited to be presenting with my fellow Strictly pal Stacey Dooley at the incredible New Year’s Eve concert in London with the legendary band Madness… what a great finale to a terrific year. Bring on 2019!”

A limited number of tickets for the event are on sale now, visit bbc.co.uk/newyearseve for further details.

The concert is commissioned by Charlotte Moore, Director of Content, Kate Phillips, Controller Entertainment Commissioning for the BBC and Jan Younghusband, Head of BBC Music TV Commissioning. It will be executive produced by Suzy Lamb, Managing Director Entertainment and Music, BBC Studios and Cerrie Frost will be series producer for BBC Studios.

The fireworks broadcast is commissioned by Alison Kirkham, Controller, Factual Commissioning for the BBC. The Creative Director is Claire Popplewell. The Executive producer is Alison Howe and the producer is Victoria Simpson for BBC Studios.
Posted by JD at 13:27