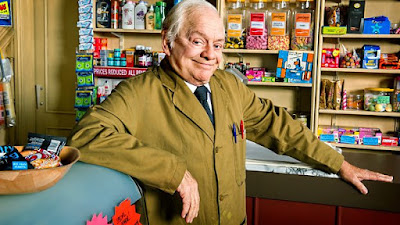 David Jason returns as Granville, the grocer with the gift of the gab, as he opens the door of Britain's favourite corner shop for a sixth series of Still Open All Hours.

There is in-tents excitement in the new series for Eric (Johnny Vegas) and Cyril (Kulvinder Ghir) when they get a little too close to nature trying to impress their wives on a camping trip. Gastric (Tim Healy) may be ready to die for love of Madge (Brigit Forsythe) but is he ready to diet? Mr Newbold (Geoffrey Whitehead)'s love life begins a new chapter after meeting Mrs Rossi (Sue Holderness) in the library, but will Mrs Featherstone (Stephanie Cole) throw the book at him if she ever finds out? Madge (Maggie Ollerenshaw) finally stands up for herself, but will anybody notice? And Kath (Sally Lindsay) stages a jumble sale starring Eric's favourite clothes. Meanwhile Leroy (James Baxter) is still longing for Beth (Katie Redford) almost as much as he's longing for a lie in. Plus there's the driving lesson of doom, a dog whispering sweet nothings, a bicycle ride full of surprises, all sorts of interesting new uses for a mangle, and the snapping drawer of that famous till.

On the forthcoming series Sir David Jason says: “It always gives me great pleasure to look forward to working with such a wonderful and talented cast and crew, kick-started by the creation of such a surreal and silly world courtesy of Roy Clarke. I am delighted that we will start filming again next year as I know we will all have fun recording each episode and that the viewers get the chance to enjoy the fun on their screens.”

BBC Commissioning Editor, Gregor Sharp, says: “There are few shows which can claim to be one of UK comedy’s crown jewels but Still Open All Hours comfortably falls into that bracket with its glittering cast and amazing heritage and we can’t wait to kneel before the new series.”

Gareth Edwards, Executive Producer, says "It's going to be an absolute joy to be back in Arkwright's, spending more time with our cast of national comic treasures and Roy Clarke's uniquely daft and delightful scripts."

Written by Roy Clarke, Still Open All Hours is a BBC Studios production, commissioned by Gregor Sharp, BBC Comedy Commissioning Editor. It is produced by Sarah Hitchcock and directed by Dewi Humphreys.

Email ThisBlogThis!Share to TwitterShare to FacebookShare to Pinterest
Labels: Still Open All Hours