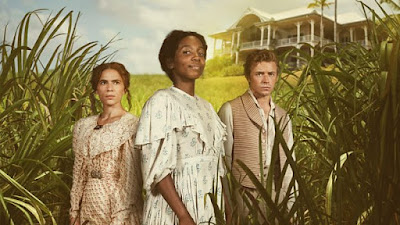 A three-part TV adaptation of the award-winning, critically acclaimed bestselling novel by Andrea Levy.
A bold new look at the final days of slavery in Jamaica, seen through the eyes of a spirited survivor, The Long Song is a three-part adaptation of Andrea Levy’s award-winning novel, written by Sarah Williams, directed by Mahalia Belo, and starring Tamara Lawrance, Hayley Atwell, Jack Lowden and Sir Lenny Henry.

The Long Song opens just as 300 years of slavery are finally coming to an end on the British-ruled island of Jamaica. But far from being a harrowing tale of misery that one might expect from such a history, The Long Song is a story of hope, passion, determination, and humour in the face of adversity. It follows a defiant, wily young woman, July, who is born a slave, but ends up as the mother of a gentleman.

The story begins at Amity sugar plantation, where a strong-willed young slave July (Lawrance) is working as a lady’s maid for her odious mistress Caroline Mortimer (Atwell). When a charming new arrival to the island, Robert Goodwin (Lowden), becomes the new overseer at Amity, July and Caroline are both intrigued by his seemingly revolutionary determination to improve the plantation for the slaves and mistress alike. But his arrival has consequences which none of them could predict.

Set during a time of social unrest and turmoil, it’s a story about the injustices which humans inflict upon each other, and the unexpected ways in which people’s humanity sometimes overrules their prejudices. Told from July’s perspective as she looks back over her life, her tone is mischievous and indomitable, and her powerful story is one of love and survival.

Three hundred years of slavery finally came to a chaotic end on the British-ruled Caribbean island of Jamaica in 1838, yet that history of British slavery has rarely been represented on our screens. The Long Song offers a bold and unexpected perspective on this shameful and rarely-acknowledged aspect of Britain’s colonial past.