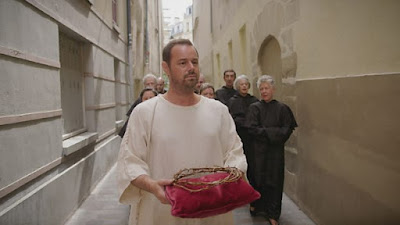 On Who Do You Think You Are? Danny Dyer discovered he was descended from King Edward III - but in new two-part series, Danny Dyer’s Right Royal Family, Danny uncovers an ever bigger family tree with even more royal, aristocratic and saintly ancestors.

In episode one, Danny kicks off his journey by eating sheep’s tongue and fighting like his Viking 35 x great-grandfather, Rollo. Following in the footsteps of his ancestor William the Conqueror, Danny tries his hand at hunting on horse and foot, Norman-style, and finally, Danny heads to Paris to learn about his 26 x great grandfather King Louis IX - also known as Saint Louis of France.

Medieval historian Dr Emily Guerry meets Danny in Pigalle to tell him more about the saintly King Louis IX, who came to the throne in 1226. Emily explains: “He was very religious, very devout. He was anti-bad behaviour. He became a man who actually modelled himself on Jesus Christ and lived to imitate Christ.”

In an attempt to live like Louis IX for a day Danny dresses in a humble robe, and walks the backstreets of Paris barefoot. Emily explains: “The reason Louis IX dressed in this humble manner was to honour his reception of the relic of the crown of thorns of Christ himself, which he was meant to have worn before his crucifixion. He led this jubilant procession through the city of Paris and the people marvelled at the appearance of their king, as he looked like a monk or friar.”

Danny remarks: “I can be told all sorts of information but to actually walk in King Louis IX’s footsteps, to think that he did this as a King... I admire him because he does exactly as he preaches and is showing everybody. He walked for six miles barefoot, in pain, and that you’ve got to respect. Considering the money and power he had and the life he could have lived, I think it’s very brave. Bless him.”

Danny and Emily then visit the Sainte-Chapelle, which was Louis’ personal chapel.

Noting the splendour of the gothic royal chapel, Danny marvels: “When you first walk in here, it made me feel a bit sick. All this beauty. This overwhelming, guttural feeling of *gasps*. I don’t think I’ve ever been in a building that’s more god-like where you think you could see God plotting up in here. If God was gonna have some windows, they’d be his windows [points towards the chapel’s stained glass windows].”

Emily then reveals to Danny that his ancestor was much more than just a king: “There’s actually one more thing I need to tell you about Louis IX. He wasn’t just a king… he was a Saint. Twenty-seven years after his death, the Pope canonised him Saint Louis. There are very few saints that aren’t virgins or martyrs, so to have the blood of a saint in your blood is an extraordinary thing.”

Astounded, Danny says: “It is isn’t it. It’s just so much to take in. I’m related to a saint.”

Emily tells Danny: “That blood is sacred blood. It works miracles in the church.”

Danny replies: “And I’ve got it coursing through my veins.”